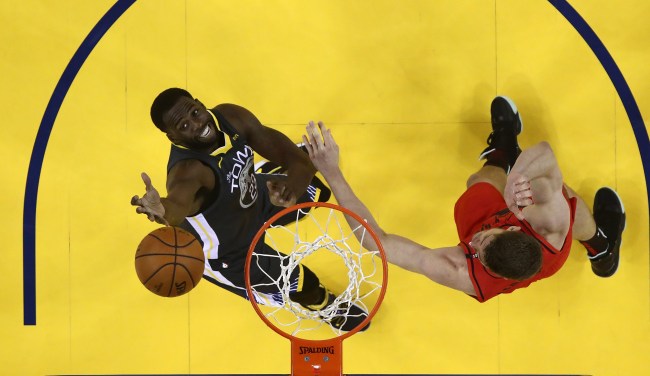 Warriors big man Draymond Green knows a thing or two about achieving greatness. The 29-year-old has been Big Ten Player of the Year, Big Ten Tournament MVP, made two Final Four appearances, was a consensus All-American and NABC National Player of the Year, won a gold medal at the Rio Olympics, has been a three-time NBA All-Star, NBA Defensive Player of the Year, and won three NBA championships.

And now, on Thursday, Green will be participating in his fifth straight NBA Finals when Golden State takes on the Raptors at Scotiabank Arena in Toronto. So yeah, he’s basically swimming in greatness.

On Wednesday, meeting the media to discuss the upcoming tilt with the Raptors, Green was asked to defend recently describing himself as the best defender ever. His response should be required viewing for anyone looking to succeed at… well, anything.

“As a competitor, if you’re trying to do something meaningful, if you don’t have the mindset that you are the best ever then you’ve failed already,” Green replied. “So if you don’t have the mindset that you’re the best reporter ever then you already failed. And that has been my mindset since I can remember. That will be my mindset as long as I can remember anything – that I am the best ever at what I do. And every day that I step on the basketball floor I will strive to be that. But my mindset will be as such as I am the best to do what I do. And that will give me a shot at being the best.

“But before you can ever reach anything you have to believe it. You don’t just mistakenly become great at something. You probably at one time or another believed that you could be great at that. And then you worked to get great at that and you reached that greatness. But you don’t mistakenly become great and then you start to believe ‘Oh man, I’m great at that!’ No, you believed that before and you worked to get that. So I always believe that and I work every day to reach that.”

Some excellent words to live by, right there.