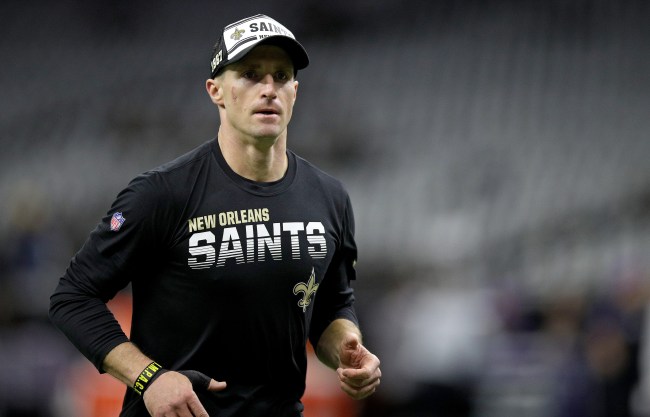 Despite the protests taking place across the country following the death of George Floyd at the hands of a Minneapolis police officer, New Orleans Saints quarterback Drew Brees is still not for NFL players taking a knee during the national anthem in protest of police brutality during the 2020 season.

On Wednesday, Brees spoke with Yahoo Finance and says he still views anthem protests as disrespectful to the flag, which is something he “will never agree with.”

Brees faced immediate backlash over his comments about anthem protests on Twitter.

Here’s the problem @drewbrees you’re only talking about YOUR FEELINGS, YOUR EXPERIENCE. Because YOU think it’s disrespectful- but what about – what Colin was protesting for? Does that make sense to you? “We are not all in this together” sounds good but clearly thats not true. https://t.co/sL8BlsaTcr

Drew Brees brought up his grandfathers serving in the military as if mine didn’t fight in WW2 too and come right back to the kind of conditions domestically that inspire people to kneel today. https://t.co/kWcCXXgRB7

Drew Brees couldn't even directly say he understood why Colin protested injustice nor that he understood the anger of many black americans. He just talked about what the flag means to him.

I truly don’t understand how Drew Brees can still think kneeling is about the flag but also wanna be part of the solution. Is his comprehension bad or he just don’t wanna get it? https://t.co/cMjpGZHrEB

Brees had the nerve to do #blackoutuesday on instagram yesterday then says this today, underscoring that for many the hashtag and black square was performative bullshit. listen, learn, read, donate. https://t.co/0dIvvMCTGk

Drew Brees, after being told Kap's protests were about police brutality, verbally vomits for 60 seconds about respecting the flag (without mentioning police brutality once).