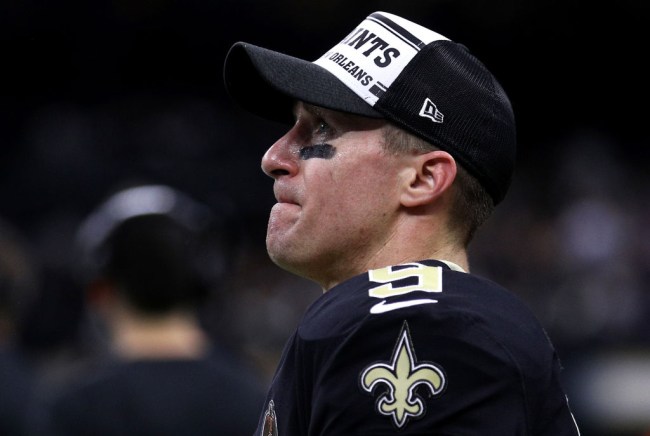 It’s been 1,251 days since Colin Kaepernick played in an NFL game, and depending on who you ask, he either hasn’t had the opportunity to be on a roster because he no longer possesses the talent to play in the league or was essentially blackballed over his decision to kneel during the national anthem over the course of the 2016 season in an attempt to call attention to police brutality.

Anyone familiar with the controversy surrounding his actions is undoubtedly well-versed in the countless takes his particular form of protest inspired but most people fell into one of two categories, as one side supported him for exercising his right to free speech while the other tore into him for disrespecting the flag and the people who’ve fought for it.

Drew Brees fell firmly in that second camp, saying “there’s plenty of other ways that you can do that in a peaceful manner that doesn’t involve being disrespectful to the American flag” after the former 49ers quarterback protested during “The Star-Spangled Banner” for the first time by sitting on the bench while it played during a preseason game (he’d ultimately change his approach after speaking with a former Green Beret but that didn’t change Brees’ stance).

In recent weeks, we’ve seen far too many examples of the behavior Kaepernick was attempting to call attention to and people across America have taken to the streets with protests of their own.

On Wednesday, the Saints QB was asked about whether or not he would support players kneeling to call attention to the matter yet again during the upcoming season and Brees doubled down on his previous comments, which, um, did not go too well for him.

The backlash was swift and immediate, as his own teammates and players not just around the league but the world of sports at large tore into him for cramming both of his feet into his mouth and growing a third leg so he could stuff another one in there for good measure.

You knew it was only a matter of time until we got an apology, and on Thursday, that’s exactly what we were treated to when he posted a lengthy statement on Instagram accompanied by a stock photo of a black hand and a white hand clasped together to make it clear he cares about unity.

Based on people familiar with the matter, Brees also personally apologized to his teammates during a video call on Wednesday and it seems the Saints locker room is ready to move forward. It also seems like he’s doing everything he can to get back into the good graces of the general public based on another apology he posted in video form on Thursday night.

“I know there’s not much I can say that would make things any better right now. But I just want you to see in my eyes how sorry I am for the comments that I made yesterday. I know that it hurt many people, especially friends, teammates, former teammates, loved ones, people that I care and respect deeply. That was never my intention.

I wish I would have laid out what was on my heart, in regard to the George Floyd murder, Ahmaud Arbery, the years and years of social injustice, police brutality, and the need for so much reform and change, in regard to legislation and so many other things, to bring equality to our black communities.

I’m sorry, and I will do better, and I will be part of the solution. And I am your ally.”

As cliché as it may be, actions speak louder than words, and while Brees sounds pretty sincere here, I have a feeling a lot of people who criticized him for his comments are going to need to see him actively attempt to be part of the solution before moving past this.