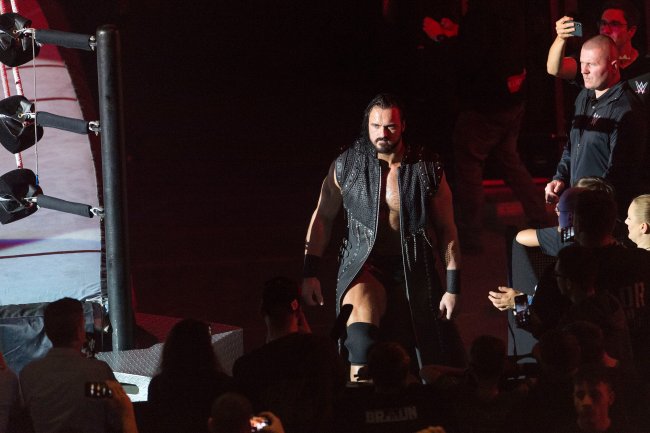 It’s been 15 years since Drew McIntyre packed up and left his tiny town of Ayr, Scotland and ventured to the land of stars and stripes. Since then, he’s become a two-time WWE champion, a two-time WWE Raw tag team champion, and an Intercontinental WWE Champion. Truly the American Dream.

McIntyre’s arrival in Tampa, Florida brought with it the intense culture shock one would expect from a guy who’s native to a place where kilts never go out of style.

McIntyre, who’s new memoir A Chosen Destiny is out now, joined NHL Celebrity Wrap to reveal why hockey was the first American professional league he gravitated to.

“Hockey players, unbelievable athletes. I just find it amazing that they can skate and have the control they have with the stick, along with the endurance. The tempo of those games is just non-stop. That’s why it took me a while to get into football.

Hockey was the first sport I gravitated towards when I moved to America.

Football, I was like, ‘My goodness, it’s just stop and start every two seconds, this is so boring!’ It took me years to start appreciating the tactics and what it’s all about and how the pads probably make it worse on your joints, so gained an appreciation for football.

But hockey I was drawn to it right away. I was like, ‘Wow, these guys are unbelievable, they’re just go, go, go. They’re so hard hitting, they’re so technical. They’re trying to skate and will that stick at the same time. They’re unbelievable.'”

If you aren’t aware of McIntyre’s wild journey from stardom to rock bottom and back, make yourself aware.

2x @WWE champ @DMcIntyreWWE on rising from the ashes.

"At 24 years old, with @VinceMcMahon pointing at me in front of the world saying: 'This is the future right here. This is the Chosen One.'

McIntyre's new memoir A CHOSEN DESTINY is out now. pic.twitter.com/IAV9n56raD