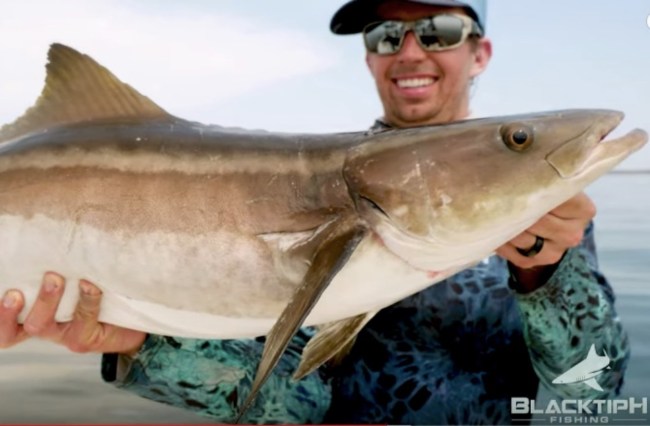 Every so often, an innovation comes along in the world of fishing that changes the game as we know it. A few examples that come to mind include circle hooks which removed the need to violently set the hook on big fish, braided fishing line that was stronger/thinner/lighter than mono, and Google Earth.

The latter might have changed fishing more than anything I can think of because it gave captains and recreational fishermen the ability to scout of new fishing grounds without burning gas on the water. B putting in an hour or two every day scouting new areas on Google Earth, inshore captains could seek out inlets and ‘fishy’ areas without having to spend days on the water getting skunked.

It’s time to add ‘drones‘ to this list of innovations that changed the fishing game. Flying a camera drone overhead gives a fishing captain the ability to see any fish in the area sitting on the surface. Using the drone they can spot fish that they’d never be able to see from a boat’s tower.

Josh from BlacktipH, the largest fishing channel on YouTube with over 1.5 million subscribers, has been chasing elusive ‘giant’ cobia in Virginia for a while. This year he was determined to not get skunked so he flew the drone.

The type of fishing they’re doing here is one of the coolest types of fishing that I’ve personally experienced. When the water is flat enough and the cobia are in these back bays spawning before heading out to sea, you can see ripples on the surface as they swim. I had the chance to do this in Bluffton/Hilton Head two years ago, fishing off of Parris Island, and I only caught one fish but we had multiple shots sight fishing for these fish and it was awesome.

The amount of fish he spots with that drone around the 8:30 mark is just insane. I completely suck at flying drones but seeing this footage legitimately makes me want to get better and more stable at it so I can crush the fish. Specifically, this would be CLUTCH in my area (Siesta Key/Sarasota) for tarpon fishing right now where it’s all done in less than 25-feet of water.

For more badass fishing videos from BlacktipH, you can check out golf legend Greg Norman crushing enormous Goliath Grouper and sharks, or this one of four New York Mets players landing a 300-pound grouper. And you should be sure to subscribe to his YouTube channel!