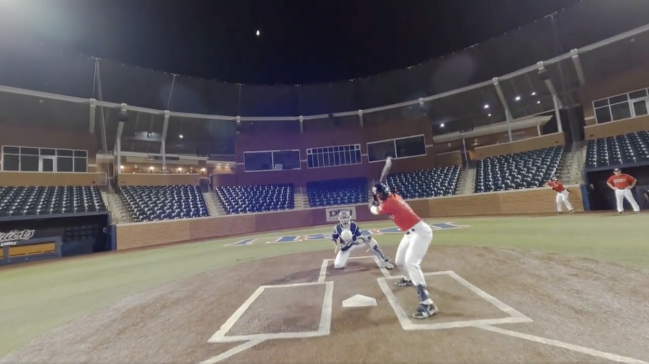 Earlier this year, NFL Films and HBO’s ‘Hard Knocks’ left viewers in awe with its single-shot drone video of the Dallas Cowboys training facility. Now another Dallas program is getting in on the action.

Just like their local NFL franchise, Dallas Baptist University gave a unique look into its program and facilities. The video is incredible and, as they said, gives you a chance to “experience college baseball like never before.”

The camera opens by following a fly ball to the outfield, weaves through the legs of players going through their warmups, flies through the batting cages and weight rooms, heads into the locker room to catch a game of ping pong and wraps the shot by chasing down an RBI double back on the field.

You saw what they did with the @dallascowboys and @NFLFilms. Now, take two minutes to experience Horner Ballpark and college baseball like never before. pic.twitter.com/25wLVCgvzu

For a small, liberal arts university with a student body of less than 5,000, Dallas Baptist does baseball right. The Patriots have reached an NCAA regional in each of its last seven seasons and have won 40 games in nine of its last 10 full seasons.

The facilities featured in the drone video are all fairly new and rival that of much larger D1 programs, if not surpass them. Horner Ballpack opened its gates in 2013 and had Astroturf installed in 2016.

Also that year, DBU built the cages, weight room and pitching lab that is shown underneath the stadium. It added the massive video board to the stadium in 2018.

Dallas Baptist has ever reason to show off its facilities, especially from a recruiting standpoint. The single-shot drone video is a fantastic way to do so.