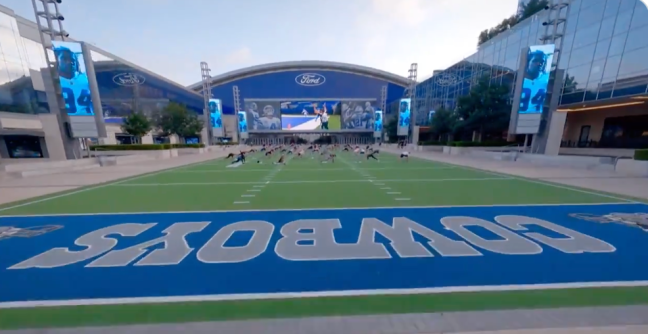 It was no secret that when the Dallas Cowboys were selected to be the team on this season of ‘Hard Knocks,’ HBO was going to go full Texas mode with over-the-top videography and features. Viewers got just that during the opening scenes of the latest episode of the show with a mind-blowing continuous drone shot of the team’s headquarters.

‘The Star’ is the Cowboys’ 91-acre campus and the drone shot showed off practically every square inch of the facility located in Frisco, Texas.

The drone starts out flying over the entertainment district before covering the multiple practice fields, both indoor and outdoor, film rooms, locker rooms, meeting rooms, and more.

The drone not only flies through the open window of a truck but also makes its way through multiple squat racks inside the team’s weight room.

You’d be correct in saying that the production team behind the drone shot didn’t capture the video during their first attempt.

According to Peter Schrager, the production team had a three-hour window to capture the perfect shot because an indoor boxing match was scheduled to take place at the facility later in the day. This gave the team enough time for 15 attempts with the drone and they finally got a video they were happy with on attempt No. 15.

The drone video was done by Sky Candy Studios, which is the same Minneapolis-based aerial videography company that put together the viral drone video flying through a bowling alley. Jay Christen was the pilot of the drone for the bowling alley video as well as the continuous shot video through the Mall of America.

The ‘Hard Knocks’ drone video was captured on a Cinewhoop-style first-person view drone with a GoPro attached to it.