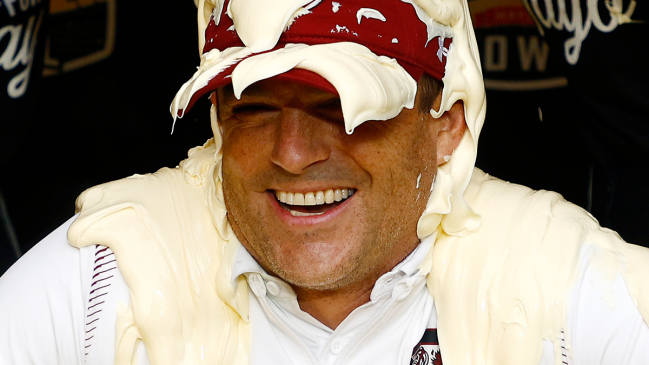 The New York Giants are widely credited with dreaming up a tradition that’s been a staple of high-stakes football games since the 1980s after defensive tackle Jim Burt made Bill Parcells the first recipient of a “Gatorade shower” after dousing the head coach with the drink following a win in 1985.

Since then, countless coaches have been on the receiving end of the chilly celebratory treatment that’s become one of the more entertaining prop bets you can make whenever the Super Bowl rolls around each year.

However, we were treated to a very unconventional (and, depending on who you ask, absolutely revolting) twist on that tradition courtesy of the mayonnaise company that replaced Belk as the sponsor of what is now known as the “Duke’s Mayo Bowl” in 2020.

When Wisconsin topped Wake Forest in the inaugural Mayo Bowl, plenty of fans were underwhelmed when Badgers head coach Paul Chryst was showered with a cooler filled with water as opposed to getting covered in a bucket of the titular condiment.

Missed opportunity for a mayo bath in the Duke’s Mayo Bowl … pic.twitter.com/jA9YyXBkvG

As a result, Duke’s raised the stakes last year by promising to donate $10,000 to the winning team’s charity of choice if their coach agreed to get covered in mayo after the game.

Shane Beamer was thankfully a good sport after South Carolina walked away with the victory over North Carolina, as he voluntarily had 4.5 gallons of mayo dumped on his head to finally give the people what they’d been craving.

As you can see in the video, Beamer narrowly avoided getting beamed in the head after the two people tasked with facilitating the dump had a bit of trouble with their technique, which has apparently inspired Duke’s to make a change that could be a great opportunity for college football fans.

On Tuesday, the Mayo Bowl issued a statement announcing it’s on the hunt for some new people to step up after deciding “last year’s dumping did not meet the standards of the Duke’s Mayo Bowl.”

It would appear that fairly tongue-in-cheek press release is setting up a search that will presumably let fans apply for that Very Important Job, and it’s safe to assume it won’t take long for more details to emerge when you consider this year’s game is less than two months away.