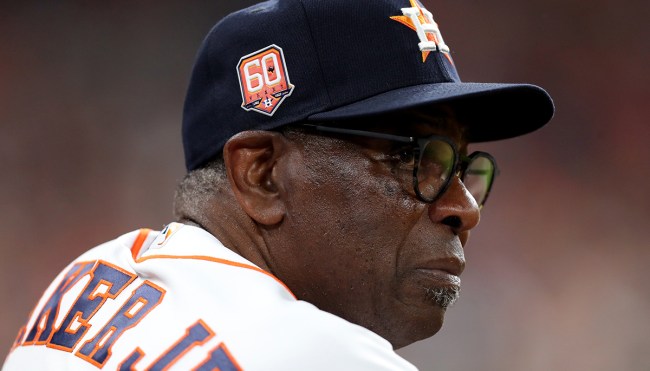 Virtually every sports fan knows the frustration that comes with being unable to figure out a way to watch a game on television, whether it’s due to the blackouts that are somehow still a thing in this day and age or discovering a contest is only being streamed on a particular platform.

However, there have been multiple cases where the people who would normally be playing an instrumental role in those games have also run into the same rage-inducing issues.

Earlier this year, Claude Giroux ended up stuck in a hotel room in California after the NHL’s health and safety protocols forced him to sit out a game between the Flyers and the Ducks. However, he was initially unable to watch his own team play after discovering the game was blacked out on ESPN+ and not being shown on any of the channels he had access to.

According to Chandler Rome of The Houston Chronicle, Astros manager Dusty Baker ran into a similar issue over the weekend after he was forced to quarantine following a positive test last Friday.

While he had obviously planned to watch his team face off against the Guardians in Cleveland on Sunday afternoon, the 73-year-old encountered a roadblock after realizing the game was only available on Peacock. As a result, he decided to settle for a pretty solid alternative: throwing on a Bob Marley documentary on Netflix while occasionally checking his phone to keep tabs on the Astros.

The Astros' game on Sunday in Cleveland aired on Peacock. Dusty Baker couldn't find a way to watch it in quarantine, so he opted for a Bob Marley documentary on Netflix instead.

"That was a pretty good afternoon," Baker said. "I followed the game on my phone."

When you consider Houston lost to Cleveland in a contest where the Guardians scored the lone run of the game in the bottom of the fifth inning, it’s safe to assume he made the right call.