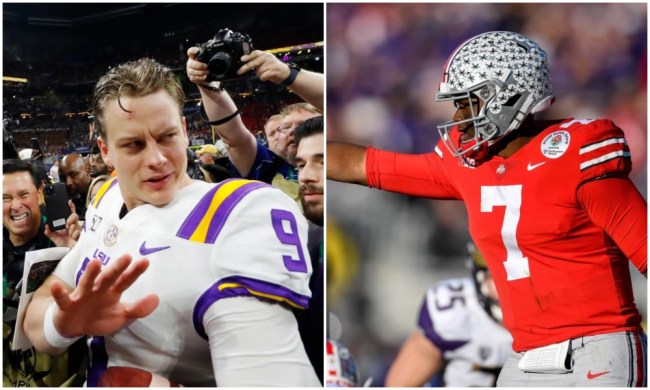 Did you know that Joe Burrow began his college football career at Ohio State before transferring to LSU and putting together one of the greatest seasons in college football history? Of course you knew that because it’s been talked about non-stop since Burrow emerged on the scene in Baton Rouge.

After taking a redshirt year in 2015, Burrow couldn’t get on the field at Ohio State thanks to J.T. Barrett and Dwayne Haskins also being on the depth chart. Haskins won the starting job over Burrow which ultimately led to his decision to transfer out of Ohio State ahead of the 2018 season.

While we’ve known about Burrow’s ties to Ohio State, we haven’t necessarily heard much as to the ins and outs of his time battling for the No. 1 spot on the depth chart and according to Haskins, the two players didn’t like one another. They have a solid relationship now, but it was tough going during their time together at OSU.

“I love Joe but during that battle, for almost two years, me and Joe couldn’t stand each other,” Haskins said on Monday’s Ring Chronicles series from FOX, according to 247 Sports. “Every day, whether it was morning workouts or when we had to do mat drills and it’d be me and him on the mat drill, it was gritty. Or it was practice and me and him are trying to get in front of each other to get a rep to throw to one of the starting receivers. It was always this heated competition but we knew we got the best out of each other. He made it hard for me and I made it hard for him and I didn’t let him take it away.”

That 2018 Ohio State team went on to go 13-1 and won the Rose Bowl with Haskins throwing for over 4,800 yards and 50 touchdowns. Burrow, of course, went on to lead LSU to the national title in 2019. Things worked out well for both teams and both players, but it’s certainly interesting to hear about the ins and outs of the now NFL quarterbacks during the couple of years they shared in college.