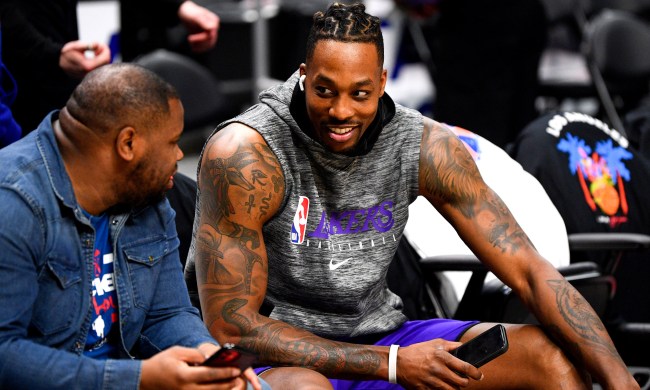 Los Angeles Lakers center Dwight Howard, who recently admitted that he does not believe in vaccinations, and was busted for not wearing a mask when someone snitched to the NBA’s anonymous hotline, now says people are “lying” about “the whole mask situation.”

After saying on Instagram Live that he doesn’t see the point in wearing a mask during a global pandemic, calling them “clickbait for a controversy,” Howard doubled down when he returned to the social media platform to “clarify” his comments about wearing masks.

“I do not want people out here lying and people on here trying to say stuff about me because of my (Instagram) Lives and stuff that’s going on,” Howard said. “Because I’ve seen some things online about this whole mask situation.”

Related: Maskless ‘Karen’ Loses Her Mind At A Papa Murphy’s Over Being Denied Her Constitutional Right To Pizza

On Tuesday, Howard read aloud from the NBA’s protocols regarding face coverings. The guidelines require everyone to wear masks except when eating or drinking, residing in their individual hotel rooms or being socially distanced outdoors.

“I have followed all these rules and I am in my room right now,” Howard said. “So when these people are saying that I’m doing stuff and I’m saying stuff on Live, we’re not gonna let it slide. … I wear my mask when I’m supposed to. I do exactly what I’m supposed to when I have to.”

The funny thing is, no one would have known that he got busted for not wearing a mask inside the NBA bubble if he wasn’t the one who told everyone about it on Instagram Live.

Howard is seemingly begging for attention only to object when he gets it.

Howard will be an unrestricted free agent next season. Anyone want to take bets on whether or not he will be back in a Lakers uniform in 2021? Perhaps he can team up with Rudy Gobert in Utah. Seems like they would have a lot to talk about.