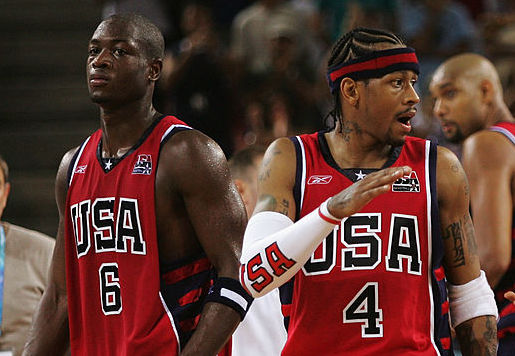 I was on the younger side when Allen Iverson entered the NBA in 1996, but as I got increasingly more familiar with basketball, he became one of my favorite players based on how effortless he made things look in addition to the swagger that oozed out of every pore of his body.

As an abnormally tall kid with terrible hand-eye coordination, I never came close to being able to do what he did on the court, but you can be damn sure I wore an arm sleeve when I was in middle school even though I had no idea what purpose it actually served.

Dwyane Wade had just started to make a name for himself playing high school ball in Chicago when Iverson made it clear he was more than going to live up to the expectations that come with being the number one pick, and following a couple of impressive years at Marquette, he also found himself near the top of the draft board when he was selected by the Heat in 2003.

While I can’t speak from personal experience, I have to assume one of the most surreal aspects of making it to the big time is finding yourself playing alongside of the guys you’ve spent years idolizing and A.I. was one of the players Wade had looked up to.

The two would eventually face off against each other a number of times (and play together at the 2004 Olympics) but Wade recently revealed they first crossed paths while at a casino in Puerto Rico where Iverson gave the then-rookie one hell of a welcome to the league.

.@DwyaneWade on the time he met Allen Iverson at a casino as a rookie:

Here’s how things went down:

“So I go with Eddie Jones, and he knew Allen Iverson was one of my favorite players, so he wanted to introduce me. And he introduced me to Iverson right there when they were gambling.

When you consider Wade made $2.6 million in his first year, I’m not sure how much he was really hurting at the time but I respect his show of fiscal responsibility nonetheless.