Dwyane Wade Once Blew So Much Money On Card Games With Teammates, His Financial Adviser Asked If He Had A Problem 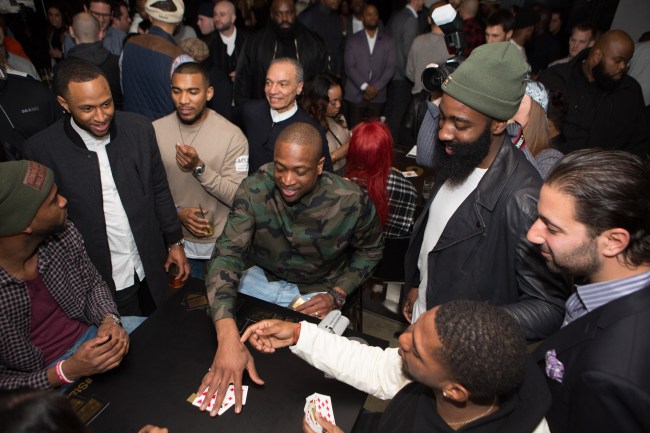 Michael Jordan’s greatest gift was enjoying the luxury of playing before the social media boom, when tales of his gambling obsession could not be blasted into the eyeballs of people looking to be upset over something.

Jordan was immune to a deep moral colonoscopy that comes with instant information, and this umbrage allowed him to validate an NBA culture that cumulated in Gilbert Arenas and Javaris Crittenton bringing guns into the locker room over a card game.

Even the squeaky clean Dwyane Wade fell victim to the pitfalls of Booray, a popular card game in pro sports where the pot inflates quickly and players win and lose large sums in the blink of an eye.

In an interview with Men’s Health, Wade spoke about his financial learning curve and the worst money he’s ever blown.

“I’ve lost a lot of money gambling … when you play sports, it’s like a rite of passage that you have to play cards on the plane,” Wade said. “It’s like a team thing, it’s how we connect, how we bond. And I’ve lost a lot of money on the plane just trying to play with my teammates. There’s been times that I wanted out because I was losing so much money. Like my finance adviser called me and said ‘hey, this is something we need to talk about. Do you have a problem?’ So losing money by gambling, to me, is the worst way to lose money. I’m not into it. I’m so glad it’s over.”

A former NBA player once claimed in a Reddit AMA: “NBA teammates fight over booray more than anything else, even women. Many players have gotten an ass-whooping over booray.” In 2011, Tony Allen punched OJ Mayo in the face when they were teammates on the Grizzlies, prompting the team to issue a gambling ban on team planes that year.

As far as the best financial advice he’s ever received, Wade had this to say:

“The best financial advice I ever got was to get rid of about 16 cars. My financial adviser came in and said, ‘Ok, so that Maybach, the one that cost $6,000 a month, you don’t drive it. How about we get rid of it, that’s somebodies house note.’ And I was like, ‘No, I’m not getting rid of it.’ Two weeks later, I watched it get taken away from my home.”

Dwyane Wade’s net worth is currently estimated to be $120 million, while his wife Gabrielle Union’s is around $20 million. I think they could have kept the Maybach.