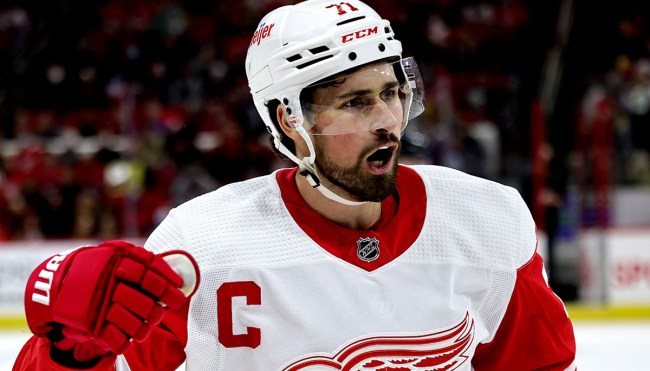 If you’ve ever had a front-row seat at a sporting event, there’s a chance you’ve encountered a sign warning you not to place any objects on the ledge in front of you. In most cases, that message is a deterrent designed to prevent random objects from falling onto the playing surface, but that’s not the only unfortunate fate that can befall them.

When you consider your typical hockey rink is encased in sheets of Plexiglass, it’s pretty close to impossible to accidentally drop something on the ice. As a result, I can understand why anyone who’s sitting rinkside would use the boards as a cupholder, but you’re exposing yourself to an issue more than a few NHL fans have fallen victim to by doing so.

A few years ago, Tyler Seguin decided to teach one opposing onlooker a valuable lesson when he managed to spill their beer by purposefully bumping into the glass during the pregame warmup (in a fun little twist, he’d previously ruined another adult beverage when he inadvertently flicked some smelling salts into a cup a guy was holding behind the bench).

Seguin may have fully intended to upend that drink, but Detroit Red Wings captain Dylan Larkin had no ulterior motive when he bumped into the boards while gearing up for a game against the Islanders earlier this month. Unfortunately, he still knocked over the beer of one of the hometown faithful, but he wasted no time seeking out a locker room attendant to bring the guy $20 to replace it.

That’s the kind of leadership you want in your locker room. Gary Peyton II would be proud.