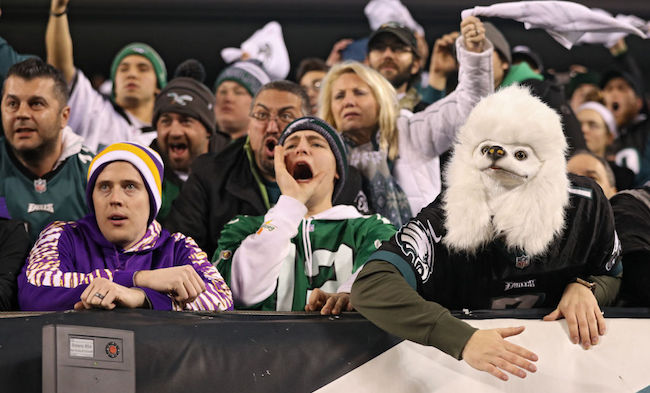 On Sunday, Minnesota Vikings fans who decided to risk their personal safety in order to attend the NFC Championship in person were given the welcome they should have fully expected from the notoriously awful supporters of the Philadelphia Eagles. While it’s unfair to label every Philly fan as a terrible person, they didn’t do themselves any favors when it came to rehabilitating their image based on the number of Vikings fans—including the family of Case Keenum— who were on the receiving end of hot dogs, batteries, beer cans, and verbal abuse.

However, a number of Eagles fans are stepping up to the plate in order to apologize for the bad behavior that was on display during the weekend. On Wednesday, the Mark Zimmer Foundation— a charity focused on giving back to children in Minnesota that was founded by the Vikings coach to carry on his wife’s legacy— announced they’d receive a number of donations from people trying to atone for the fanbase’s sins.

A flood of donations coming in from @Eagles fans today to the MZF, most of them apologizing for how their fans treated @Vikings when they were in their city.

As of this writing, the foundation had received around $11,000— a number that’s only continuing to grow.

While we may have our differences, we give credit where it's due…@eagles fans have donated nearly 11k to MZF with heartfelt apologies for how SOME of their fans treated @vikings in Philly. This is amazing! We promise we will change some lives with this money! Thank you!

This is just the latest instance of an awesome and ever-growing trend of NFL fans who have flooded various charities with donations in recent weeks. Buffalo Bills supporters sparked the movement when they donated over $300,000 to Andy Dalton’s foundation as a thank you for helping their team make the playoffs, and Vikings fans followed in their footsteps when they broke the $200,000 mark while acknowledging of Saints punter Thomas Morstead’s gutsy performance against their team.

However, they haven’t stopped there. One person launched a GoFundMe in an attempt to raise money for the Eagles Charitable Foundation to prove how classy their fanbase is in a fantastic example of Midwestern passive-aggressiveness.

With that said, it’s hard to hate on such a good cause.