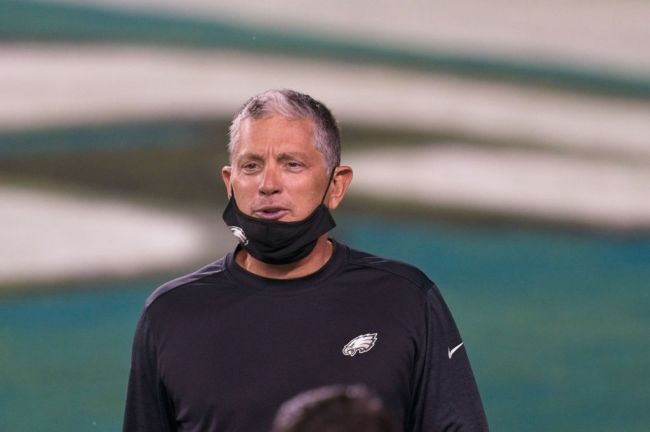 The Eagles’ playoff hopes were officially squandered last Sunday with their 37-17 loss to the Cowboys, but Philadelphia does actually have something to play for in its regular-season finale against Washington this weekend: spoiling Washington’s NFC East title hopes.

If Washington wins, the Football Team wins the NFC East with the hilarious record of 7-9 owning the tiebreaker over the Cowboys even if Dallas knocks off the Giants.

While Philadelphia is the only team officially eliminated from the playoff hunt, defensive coordinator Jim Scwhartz is still pulling out all the stops and has implemented a ‘no-hat rule’ for the game against Washington.

No, he’s not telling his players not to wear hats as they arrive to the stadium, he’s trying to motivate the Eagles from keeping Washington out of the win column and celebrating with NFC East champion hats on their home turf.

“We’ve got to have a no-hat rule this week,” Schwartz said, according to Penn Live. “We can’t let opponents put division win hats on at the Linc. There’s a lot of pride in that, and all our focus has to be [on] accomplishing that this week.”

Trophies aren’t handed out in the NFL for division championships, the only celebratory items teams get are hats and shirts, so Schwartz’s rule fits.

History doesn’t favor the Eagles on Sunday, however. Washington was able to come to Philadelphia and beat the Eagles 38-24 back in 2015 to clinch the NFC East in what was Chip Kelly’s final game as the head coach of the Eagles.

These two teams squared off in Week 1 with Washington winning in D.C. 27-17.

How things have gone this season for both the Eagles and the entirety of the NFC East, it would be fitting to see some sort of bizarre scenario play out on Sunday with the Eagles playing spoiler and seeing either Dallas or New York walk away with the division title.