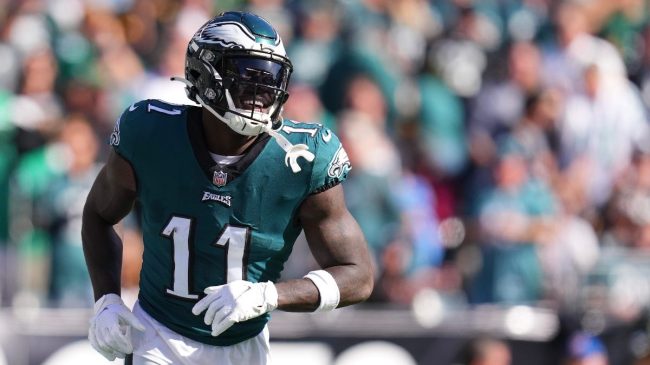 The Philadelphia Eagles are the hottest team in the NFL right now. AJ Brown had a massive performance in Week 8 hauling in three touchdowns. However, that didn’t stop his teammates from clowning him after one specific play.

There was one particular play on Sunday that could have been the fourth touchdown for Brown. However, a Pittsburgh Steelers defender caught him with a shoelace tackle to prevent the score. Afterward, Eagles teammates approached AJ Brown and mocked him for getting caught. His reaction is absolutely hilarious.

The Eagles clowning A.J. Brown for getting caught from behind is great 😂 pic.twitter.com/7oDvghONmb

Maybe the Eagles will have a race at practice to finally determine who is the fastest on the team. Either way, it’s awesome to watch a team have fun like that on the sidelines. Philadelphia is a legitimate contender right now and AJ Brown plays a large role in their success. He surely looks like the missing component that was needed to unlock Jalen Hurts.

Additionally, Brown looks as though he’s having fun in Philadelphia as well. Even if his teammates clown him for his speed or lack thereof. AJ Brown seems comfortable playing for the Eagles, especially considering they’re airing it out much more often than his previous team, the Tennessee Titans.

Look for AJ Brown and the Eagles to continue flying high, as they look like a legitimate Super Bowl contender this season.