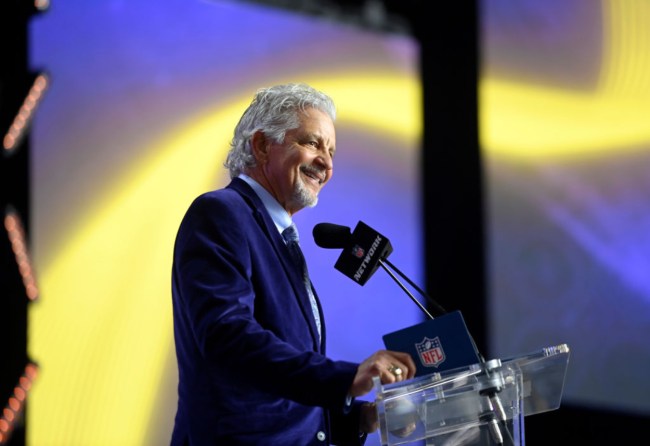 Ed Marinaro, former NFL running back and head coach on ‘Blue Mountain State,’ decided to have a little fun while on stage at the NFL Draft. While fans may have appreciated his candor, the league certainly didn’t.

During the second round of the 2022 NFL Draft, Marinaro took the stage to announce the Vikings’ selection of Andrew Booth Jr. with the 42nd overall pick. Marinaro played four seasons with the Vikings, so him making the pick made sense. What he proceeded to do prior to announcing the pick, however, didn’t.

Marinaro took over two full minutes before announcing the pick for Minnesota. A producer of the draft had to walk out on stage to direct him to simply read the draft selection. As the producer approached him, he thought he was about to get “a Will Smith slap.”

“It wasn’t like it was a conscious effort to be kind of self-indulging, if you will,” Marinaro told the St. Paul Pioneer Press. “I just thought it was fun. I just provided a little bit of entertainment, if you will. . . . I was sort of surprised. I thought she was going to give me a Will Smith slap or something. But I got the hint.”

Marinaro is of course referring to Smith slapping and yelling at Chris Rock during the 2022 Oscars last month.

Given just how many celebrities, social media influencers, etc. walk on stage to announce picks, it’s surprising we don’t see more people take up way too much time while on the draft stage.

Announce The Draft Pick And Get Out

While 99.9% of everyone watching the draft doesn’t want to hear anyone talk and simply wants to hear the player drafted, at least Marinaro tried something a little different.

To Marinaro’s credit, he did ask someone prior to walking on stage if he should improvise a bit before making the announcement.

“I said [to a draft representative], ‘What do we do? Should I say something fun,’ and she said, ‘That’d be good.’ So that’s kind of what I did,” Marinaro said. “I got caught up in the moment when I got out there when the fans were screaming, and it was a little overwhelming.”

“I felt like the Pope up there with all those fans. I really didn’t think about the time. They didn’t say to me, ‘You’ve got 60 seconds.’”

The NFL wasn’t alone in being frustrated with Marinaro, the fans let him hear it as well.

“Somebody called me a D-list actor,” Marinaro explained. “I’m 72 years old and I’ve got people attacking me. It was like I committed a mortal sin or whatever to a lot of people who got real serious about this draft.”

Marinaro played in 58 NFL games during the 1970s before turning to acting.