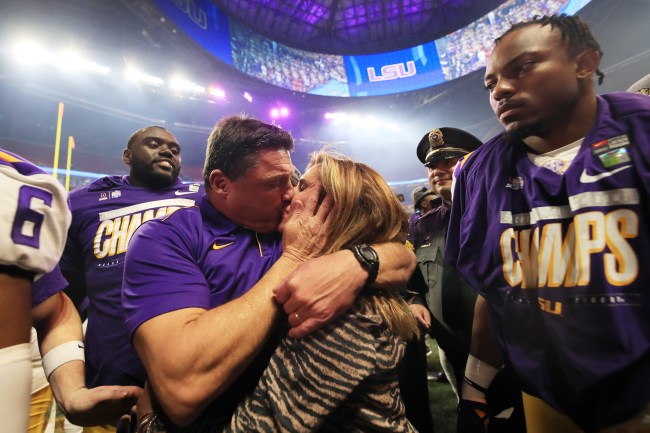 Hypothetical Reporter: Ed, you just led LSU to its first National title in over a decade. You are the most charismatic and ingratiating coach in the country and your future is so bright it’s blinding. What are you going to do to celebrate this seminal moment in your life?

Coach O [in the manliest voice the world has ever known]: A ham fucking sandwich with the family sounds about right.

On Monday night, Coach O experienced the pinnacle of his 30+ years in coach, etched himself in college football history, and was awarded a $500,000 bonus for the title win. Add this to the $1.275 million he already secured in incentives based on team performance and coach of the year awards.

Mr. Orgeron is richer than he’s ever been, and acting like he just hit for $10 on a gas station scratch ticket.

Coach O tells SVP he's gonna celebrate by getting a ham sandwich with the family pic.twitter.com/wmlmPc7uyM

Find yourself a man who speaks about you the way Coach O speaks of his family:

“We’re just simple folks. We love our life, I love my family. My personal time with them — we don’t go out, and we don’t do things like that. We represent the state of Louisiana so we’re excited.”

What a majestic human.

If Clemson won Monday night, Dabo Sweeney would have earned himself an extra $250,000 to pair nicely with his $600,000 in incentives and FBS-high $9.3 million salary this season.