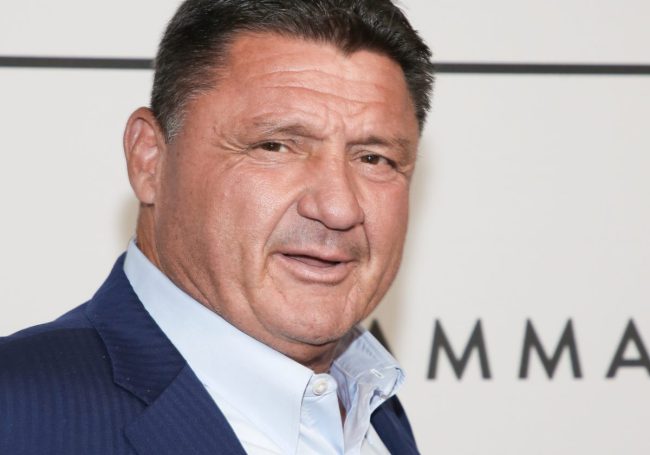 It wasn’t long ago that Coach Ed Orgeron was on the top spot of the college football world. He led a national title winning LSU team that’s been called one of the greatest of all-time.

That team posted a perfect 15-0 record, annihilating both Clemson and Oklahoma in the College Football Playoff by a combined score of 105-53. Joe Burrow won the Heisman trophy while four other Tigers were drafted in the first round of the 2020 NFL Draft.

And Orgeron was the man that got them all together on the Bayou.

Following that undefeated season, His Tigers went just 11-11 and he was fired after conclusion of the 2021 season. LSU went on to hire Brian Kelly in a bit of a surprise move, which hasn’t gotten off to the best start in Baton Rouge.

While appearing at the Little Rock Touchdown Club on Tuesday, Orgeron talked about the moment he found out his was being let go by the Tigers.

Ed Orgeron talked about the moment he found out he’d be fired at LSU, and in classic Coach O fashion, he gave the best possible response.

“I’m so grateful for my time at LSU. Ya know, some coaches have a shelf. Some coaches have 50 years, some coaches have 12, mine was six. Good! I got to tell you, we had a meeting, they said, ‘Coach, things are not going well.’ No shit, Ray Charles can see that, brother. [LSU AD] Scott Woodward is a friend of mine today, really a lot of respect for him and the way they handled me. He said, ‘Coach, you’ve got $17.1 million on your contract and we’re going to give it to you.’ I said, ‘What time you want me to leave and what door you want me out of?'”

I mean, you can’t be that upset about a $17 million buyout, even if it means you’re getting fired from your job. He likely kicked back and enjoyed a cold one with his next few months of vacation.

It’s good to hear that the Louisiana native is still high in his opinion of LSU. Even so, a little part of him might’ve enjoyed that one-point defeat to Florida State on Sunday.