Ed Orgeron Says ‘Most’ Of LSU Players Have Already Had COVID-19, Hopeful They Won’t Catch It Again 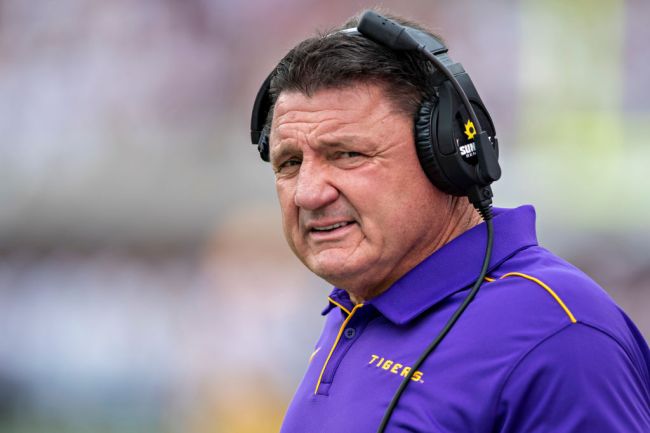 With some conferences moving forward with a college football season this Fall it was inevitable that players were going to test positive for coronavirus. Whether the athletes spread it between one another on the field or in the locker room or catch it by living a normal college student life, we were going to see positive tests pop up everywhere.

While some schools are keeping their positive test numbers under wraps, LSU head coach Ed Orgeron is being honest with the media. While talking to reporters on Tuesday, Orgeron admitted that “most of our players have caught” coronavirus.

“Hopefully that once you catch you don’t get it again,” he said.”I’m not a doctor. I think they have that 90-day window, so most of the players that have caught we do feel like they’ll be eligible games.”

While Orgeron’s comments may be eye-opening to some, there isn’t clear-cut evidence that people can catch COVID again after already having it.

This is going to be a topic and storyline to follow for every single college football program that hits the field this Fall. The SEC protocol in place right now states that players who have tested positive don’t have to be tested again for 90 days.

Students at the University of Alabama have been hit hard by the coronavirus reporting over 1,200 positive cases at the end of August but stated that it hasn’t had one student hospitalized due to the virus.

Related: Lane Kiffin’s Idea For Ole Miss To Practice Less Than Other Teams Due To COVID May Be Genius