Eddie Pepperell Sends Out Warning Shot, Says He’s About To Bulk Up Like Bryson DeChambeau 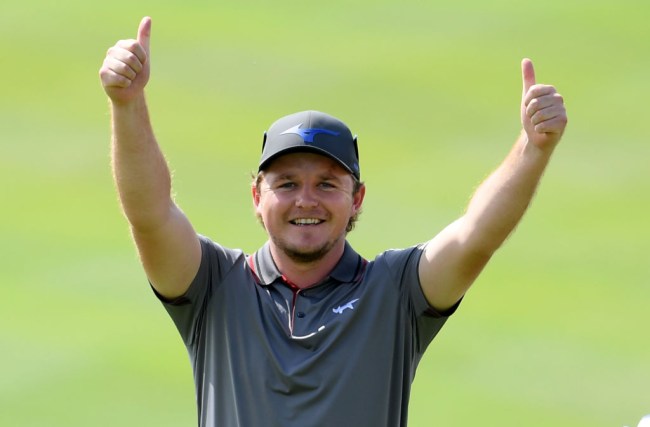 Even the most casual golf fans walking the planet know about Bryson DeChambeau’s transformation at this point. The man has put on some serious mass over the past 18 months or so in an effort to pick up ball and swing speed and the experiment has been working since the PGA Tour’s restart, to say the least.

Not only does DeChambeau lead the Tour in average driving distance, but he’s fresh off of a win at the Rocket Mortgage Classic after three straight top-eight finishes. His length off the tee isn’t the only thing working, either. With his win at the Rocket Mortgage, DeChambeau became the first player of the Shotlink era (since 2004) to win an event while leading the field in both strokes gained: off the tee and strokes gained: putting.

It’s not only fans that are taking notice of DeChambeau’s bulk up and success on the course, fellow PGA Tour players are paying attention as well. Rory McIlroy admitted to having some ‘oh shit’ moments after playing with him a couple of weeks back and now Eddie Pepperell – the king of golf Twitter – seems to be taking a page out of DeChambeau’s book and attempting to bulk up.

Shit just got real @b_dechambeau you better watch out cause this little whippersnapper will be within 75 of you in no time. 🏋🏼‍♂️ pic.twitter.com/jysRuzSLeD

DeChambeau has put on well over 40 pounds since last September weighing in at over 240 pounds. Pepperell is listed at six-foot, 161 lbs, so he’s got quite a way to go to reach DeChambeau’s status.

When it comes to numbers off the tee, DeChambeau is averaging 323 yards while Pepperell is averaging 294 yards.

Related: Bryson DeChambeau’s Diet Is Packed With As Many As 6 Shakes Each Day And A Ton Of Other Heartiness