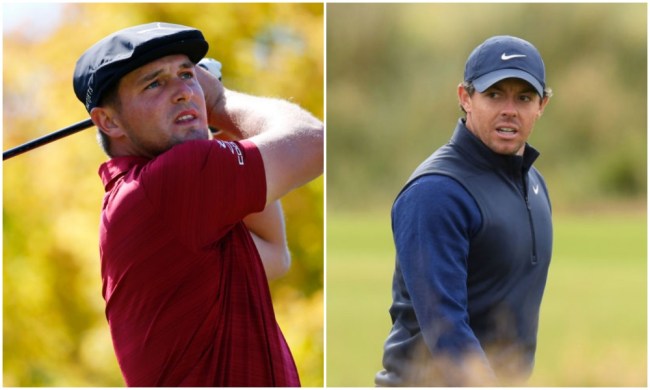 Bryson DeChambeau, and specifically his transformation into a human boulder, has been a major topic of discussion over the past six months or so, and last week we got to see the new-look DeChambeau.

Despite him being vocal about putting on muscle and weight in an attempt to pick up speed and distance, everyone was a bit surprised to see just how big DeChambeau was when he stepped on the first tee at the Charles Schwab Challenge on Thursday.

In less than a year he’s put on 40 pounds, including about 20 pounds during the three-month break, and is now weighing in around 240 lbs. That’s a rather large number, but the experiment worked, big time.

DeChambeau led the field in driving distance averaging over 340 yards off the tee and finished T-3. He played alongside Rory McIlroy during the final round and even the world’s No. 1 player was blown away by DeChambeau’s distance off the tee. There were some full-on ‘holy shit’ moments between McIlroy and his caddie.

It’s not easy to impress Rory McIlroy off the tee. Last week at Colonial Bryson did:
“[Bryson] hit a couple drives on Sunday that Harry and I just looked at each other, and we're like, holy shit, that was unbelievable,” Rory said.

Bryson DeChambeau made quite the impression off the tee last week.@McIlroyRory couldn't help but notice. pic.twitter.com/7XNhu21xb0

If you can get that sort of reaction from McIlroy, who is one of the longest players on Tour, it’s a prime example that DeChambeau truly is obliterating the ball and putting a move on it unlike anything we’ve seen.

DeChambeau leads the Tour in average driving distance this season averaging 323.8 yards off the tee. McIlroy is averaging 319.2 yards off the tee, good enough for the No. 3 spot on Tour, but the fact that DeChambeau’s longest drive of the was was 367 yards and McIlroy’s was 344 yards says it all.