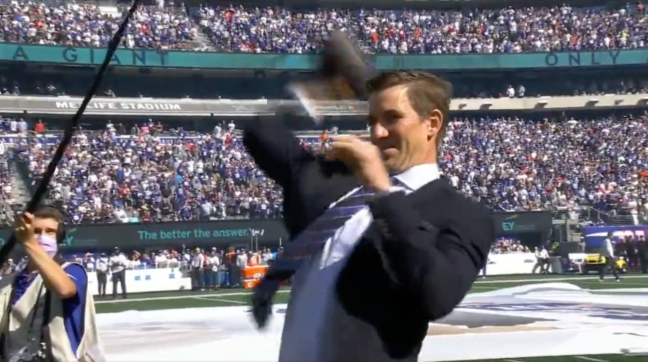 Eli Manning is an NFL Hall of Famer and there simply is no debate. You can try to diminish his perfectly average 117-117 win/loss record or bring up his interception numbers, but the man has two rings.

Not one, but two— the fourth-most in NFL history, behind Tom Brady, Joe Montana, Terry Bradshaw and Troy Aikman. That is elite, NFL Hall of Fame company for which Manning will soon join.

Eli’s number hangs in the rafters.

Regardless of your beliefs (which are incorrect if you argue against him being inducted), he is officially amongst New York Giants greats. Manning had his jersey retired in New York (New Jersey) on Sunday and nobody on the Giants will wear No. 10 again.

The 40-year-old had quite a few of his former teammates in attendance at the ceremony and they celebrated him in style. He look great as he delivered a speech and saw his number unveiled in the rafters, and fireworks rang out throughout MetLife Stadium.

After the ceremony had finished, Manning and David Tyree decided to take one last parting shot at New England.

As you might remember, both of Manning’s Super Bowl wins came over Tom Brady, Bill Belichick and the Patriots. Eli forever owns the greatest quarterback in NFL history.

During the final two minutes of Super Bowl XLII on February 3, 2008, one famous catch helped seal the first of Manning’s two wins.

Manning evaded pressure in the pocket and threw a jump ball down field. On the receiving end, Tyree went up and secured the ball on top of his helmet to make the catch heard around the world.

Before Manning left the field during his retirement ceremony, he and Tyree danced all over the Patriots’ grave and recreated the historic moment. Tyree went deep and Manning lobbed one down field right into his arms and onto his head.

Now that Eli’s number is retired in New York, the Hall of Fame is all that is next. Maybe he will take aim at New England while on stage at Canton?