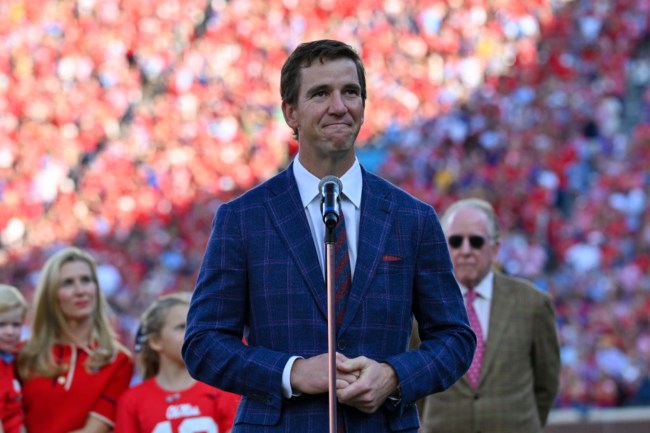 It’s been over a month since Eli Manning decided to give the double bird on live television, but we’ve finally reached the inevitable outcome to the situation. Manning was on the receiving end of three complaints to the FCC for showing the world both of his middle fingers.

During the Eagles-Cowboys game on Sept. 27, Chris Long was a guest on the ESPN2 Manningcast. Eli, having played against Philadelphia for many years, took it upon himself to talk about Eagles fans.

“You go to Philly, and you’re getting the double bird right away from a 9-year-old kid,” Manning said, while holding up both of his middle fingers right at the camera. “I would give the bird – I don’t know, can we do that? I’m sure we can blur that out, right?”

Well, ESPN wasn’t able to blur out Manning’s middle finger, so in theory, Eli flipped off every viewer watching, and three didn’t appreciate the move at all.

Eli Manning with the double bird on live TV. 😂 pic.twitter.com/LPU41kdFVO

‘Despicable’ and ‘unacceptable’ were two of the many used adjectives the complainers to the FCC used to describe Manning’s gesture at the camera.

“On ESPN ‘Monday Night Football’ Eli Manning used profane gestures that were despicable and unacceptable and fines should be levied,” one viewer wrote to the FCC, according to TMZ. “Young Americans should never be exposed to something like that, it was disgusting.”

All in all, three complaints out of the hundreds of thousands of people who witnessed the moment live isn’t all that bad.

Also, does anyone actually know someone that’s filed a complaint to the FCC? I feel like the majority of those that do file complaints do it so they can simply have their two seconds in the sun but to each their own.