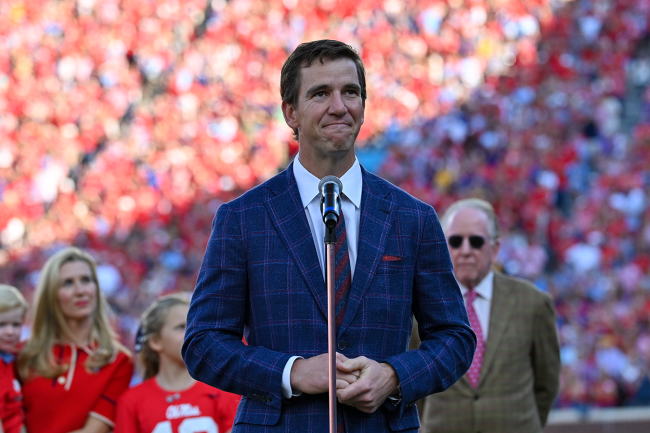 When Arch Manning committed on Thursday, it ended one of the most highly-scrutinized recruitments of all-time. The nation’s top-ranked prospect decided on the Longhorns over the Georgia Bulldogs and will play his college career in burnt orange.

By committing to Texas, a large chain reaction is set to follow Manning. At least one top recruit, if he keeps his promise, will be joining him in Austin.

However, there are questions about Manning’s path to playing time. As things currently stand, there does not seem to be an opportunity for the first grandson of football to see the starting job at Texas until at least 2024.

That is okay with Manning, obviously. He made his decision knowing what the Longhorns’ quarterback room looks like.

And it appears as though his family might understand what is ahead as well. Eli Manning, Arch’s uncle, reacted to his nephew’ commitment on Thursday night and may have hinted at when Arch will get on the field. He also may have been using a figure of speech. And both of those things can be true at the same time.

When asked about his nephew’s commitment, Eli said that he can’t wait to watch him play— “in a few falls.”

"Peyton and I are excited to go to Austin in a few falls and watch him play."

The middle part of that sentence is the important part. The word “few” is typically used to mean three, but it can technically be used in reference to two or more. By saying the timeline in such a manner, did Eli indicate that he and his family understand that it will take some time for Arch to get on the field?

It certainly seems that way.