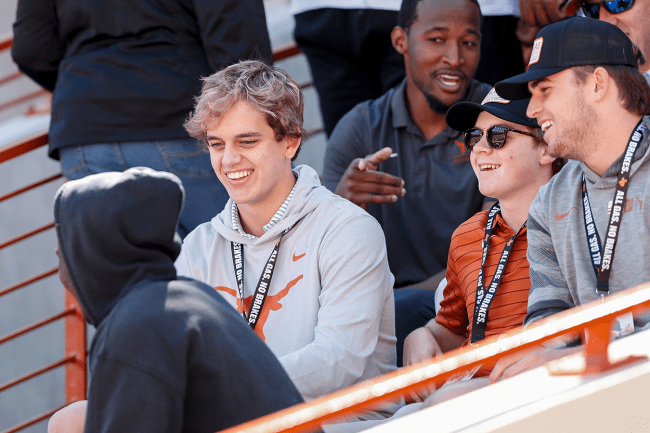 Arch Manning’s recruitment has come to a close. The No. 1 prospect in the Class of 2023 has committed to play his college football at the University of Texas.

Not only does Manning’s commitment lead to questions about Quinn Ewers and the starting job, it might lead to another top recruit doing the same. If he sticks to his word, that is.

Over this past weekend, the first grandson of football was in Austin for his official visit. While he was there, as was Mikal Harrison-Pilot.

Harrison-Pilot is the No. 130 overall prospect in the same class. The 6-foot-0, 190-pound safety is the No. 9-ranked athlete in the country and is listed as a four-star. His highlight tape is full of ball-hawking and slobberknockers.

During the campus visit last weekend, Harrison-Pilot may or may not have revealed that Manning committed. Considering the timing of the announcement, it’s very possible.

What we do know, is that Harrison-Pilot will be following Manning to Austin if he keeps his word. The Texas-native commented on an Instagram live video saying that if Manning was to commit to play for the Longhorns, as would he.

I think it’s because it skipped pic.twitter.com/zLCTFzjExf

As things currently stand, Harrison-Pilot is also considering Cal, Houston, Oklahoma and TCU, though he has 47 total offers. There is a lot of time for things to play out differently, and he may choose not to honor a comment he made on an Instagram video, but it seems like Texas has a pretty definitive lead after Manning made his announcement.