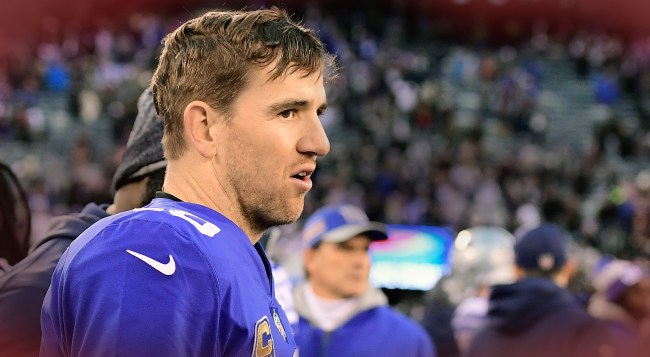 New York Giants quarterback Eli Manning has long been known as one of the biggest pranksters in the NFL. I guess growing up with two rowdy, and very competitive, brothers in the house will do that to a guy.

As For The Win chronicled awhile back, the stories of Eli Manning’s pranks on his teammates are the stuff of legend.

From painting the entire offensive line’s dress shoes purple to boxing in the kicker’s car so he couldn’t leave early to doing awful things to teammates towels while they were showering, and more, Eli is notorious.

And those are just stories that have been made public.

This week, one more prank story was added to the Eli Manning legend when the quarterback spoke at Tuesday night’s Giants Town Hall, reports NYDailyNews.com.

He said he played one of his favorite pranks in his career on Andre Woodson, a rookie sixth-round QB picked out of Kentucky in 2008.

Woodson showed up late to a voluntary OTA and missed the quarterback meeting. So Manning excused himself to the bathroom and cleared out Woodson’s locker, grabbed a piece of Giants stationary and wrote “come meet me in my office, bring your playbook – TC” (as in Tom Coughlin).

The prank worked so well that Woodson brought the paper to Manning and asked him what to do. Manning said I guess you should go upstairs and apologize. But when Woodson actually began walking up the stairs toward Coughlin’s office, Manning raced and grabbed his new teammate and told him it was all a gag.

“I felt bad for a little bit,” Manning said with a laugh.

The biggest prank of the evening, however, might have come from the Giants’ first-round draft pick this year, quarterback Daniel Jones.

“I have a question for Daniel Jones,” the young man said to the Giants’ rookie QB. “How many Super Bowls are you gonna win?”

The fans exploded in cheers. Jones seemed uncomfortable, well aware he could create a headline, and joked that his microphone had died.