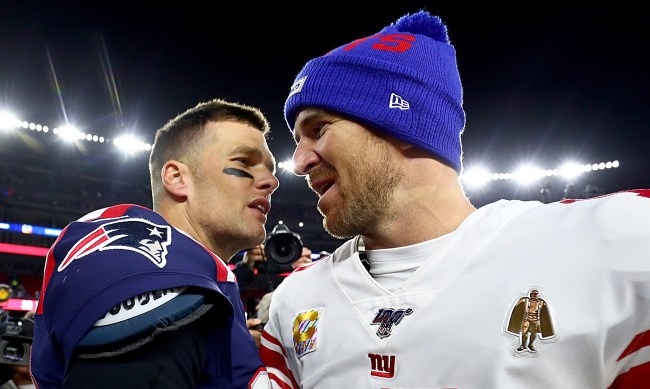 Eli Manning knows that no matter how many Super Bowls Tom Brady ends up going to in his ridiculously successful career, he has always got a 2-0 record against the GOAT when it comes to their head-to-head matchups in the big game.

Brady currently sits at an absurd 6-3 in Super Bowls and the only other time he lost to anyone other than Manning was in 2017 versus Nick Foles and the Eagles. 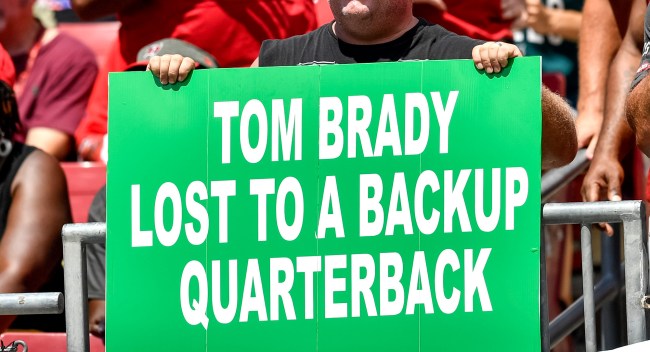 Not that Manning likes to bring it up when he has a conversation with TB12. Or so he says.

“It’s one of those things, it’s not something I ever say or ever think a lot about,” Manning told the New York Post this week. “I’ve been around Tom numerous times, and I’ve never brought up a Super Bowl or our games versus them. He actually brings it up. It still bothers him a little bit, especially the ’07 one when they had the chance to go down as the greatest team of all time.

“But I don’t have any bragging rights with Tom. This is his 10th Super Bowl, and I’m so impressed with his whole career.”

If you believe Manning really thinks he has no bragging rights over Brady, I’ve got some land down in Florida I’d like to sell you.

There are only a select few of us that can make a play like this! Ha https://t.co/7mYbWMOKpF

Back in May, Manning said about Brady’s chances this year, “It’s gonna be tough” for Brady to succeed this season in Tampa Bay.

Perhaps that was wishful thinking, or perhaps he was just being realistic considering the new team and the ongoing pandemic. Either way, here we sit, less than two weeks from Super Bowl 55 and Brady is once again defying the odds at the ripe old age of 43.

“It’s really impressive what Tom’s been able to do,” added Manning. “Just the fact, changing teams after 20 years, with one team where you’ve had so much success and going to a new team, new city, new state during a pandemic, where you have a shortened off-season and different rules and kind of get the same results. Getting back to a Super Bowl, at age 43, yeah, it’s so impressive. It was hard to think that was going to be possible. He’s obviously got a special demeanor and a special ability to get guys to rally around him.”

He’s certainly not lying there.