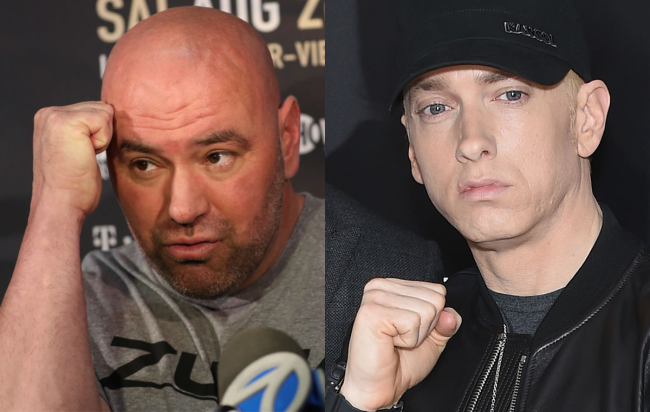 UFC President Dana White is not the kind of guy who’s ever been afraid to say what’s on his mind, and when you consider he’s largely responsible for turning the UFC into the multibillion-dollar MMA empire that it is today, it’s safe to his “My way or go get hit by a fucking car on the highway for all I care” philosophy has worked out pretty well for him.

Dana White is also one of those people who never take “No” for an answer, as we’re talking about a guy who built a massive complex dubbed “Fight Island” in Dubai to make sure the UFC could continue to hold fights during the pandemic—including UFC 257, where Dustin Poirier will take on Conor McGregor for the first time since 2014 in a highly anticipated rematch that will air on ESPN+ on Saturday night.

White could be described as a straight shooter but I’d argue “verbal marksman” would be a better descriptor, as he’s never been afraid to call out anyone if he thinks they don’t have what it take to compete in the UFC. Over the years, fighters who’ve gotten pummeled in the Octagon during an underwhelming showing have often found themselves at the receiving end of one of White’s verbal beatings, including Tyron Woodley and Jon Jones, the latter of whom the MMA magnate called the biggest waste of talent he’s ever seen.

On Thursday, White appeared on SportsCenter to drum up some excitement for UFC 257 and was joined by Eminem, who might be the only person on the planet who has less of a filter than the man he shared the screen with. During the conversation, the rapper took aim at White and his penchant for unfairly criticizing UFC fighters who’ve gone on to make him eat his words, saying, “The best part about your opinion is that it doesn’t matter, and if every fighter you’ve had listened to your opinion when you doubted them, you wouldn’t have a fucking league.”

That clip was uploaded by former UFC fighter Brendan Schaub, who doesn’t exactly have the best relationship with his former boss based on the war of words they engaged in a few years ago. It’s not entirely clear what particular opinion sparked this comment, and based on what SportsCenter anchor Michael Eves had to say, we won’t know for sure until the interview airs in its entirety on Saturday.

It’s worth noting Eminem was featured in a promotional video for UFC 257 that was released earlier this month, so I wouldn’t be shocked if this particular comment was intended to drum up some publicity for the event.

By any means necessary! #UFC257 – LIVE from Fight Island.

If that is indeed the case, I tip my cap to them, because it certainly worked.