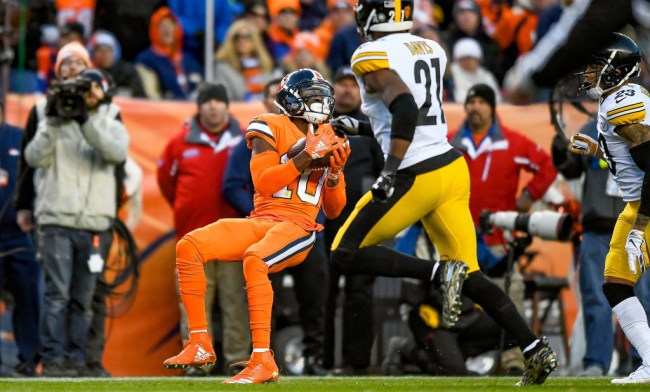 Once again, Pittsburgh Steelers quarterback Ben Roethlisberger threw a teammate under the bus for what he felt was a contributing factor to his team losing a game.

This time the target of Big Ben’s scorn was wide James Washington for dropping an easy touchdown pass in the Steelers’ loss to the Broncos.

Ben Roethlisberger after every Steelers loss that was his fault pic.twitter.com/ILjpAGaMm9

In defending himself after being criticized for being a bad teammate, which he kind of is, Roethlisberger said he has “earned the right” to throw other players on the team under the bus because he’s the captain.

One player who knows all about being Ben Roethlisberger’s teammate is current Bronco Emmanuel Sanders who caught passes from the QB from 2010 to 2013 before signing with Denver.

During his appearance on The Rich Eisen Show on Wednesday, Sanders talked about what he would do if it were him that Ben was throwing under the bus.

“If I was in that locker room, that wouldn’t sit well with me because that’s a situation that I feel like you handle in-house instead of talking about it. Obviously he’s the leader of that team, he’s the quarterback of that team and everybody looks to him to lead. So in doing that, in going to the media and saying those things, I definitely would pull him to the side and be like ‘hey man, if you have a problem with anything I do on the field, I would rather you talk to me in person about it than talk talk about it on the radio, because there’s ways to avoid that,'” Sanders told Eisen.

“Obviously, his emotions are probably running high after the loss and the interceptions and all that stuff… still, some things you keep in house, and Ben knows that.”

You mean this interception?

Eh, I’m sure that was all the receiver’s fault too.