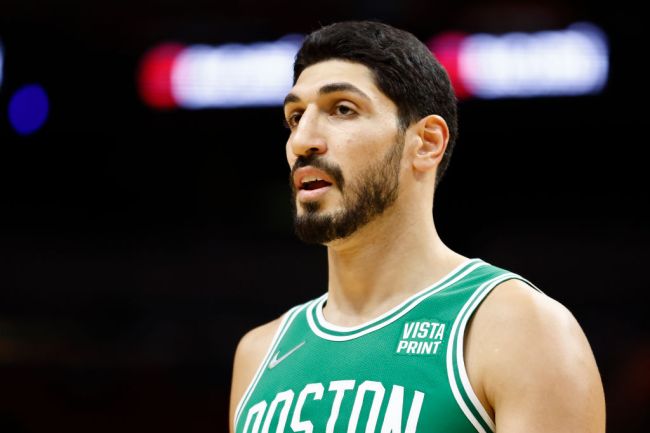 While Enes Kanter — now named Enes Freedom after becoming an American citizen — apparently fancies himself as a freedom fighter, the Boston Celtics center might want to do some more research before he begins calling out his fellow NBA players.

On Sunday, Kanter took to Twitter to call out Jeremy Lin — who was born in Torrance, California — for taking money from the Chinese government and not standing up for the people of Taiwan. The tweet hasn’t been received as Kanter hoped, though, as the 29-year-old is being soundly shredded for taking unnecessary shots at Lins, whose own Twitter feed consists of essentially nothing but his charity work helping underprivileged children.

You really living up to this pic.twitter.com/hsNSyproQM

Jeremy was born in California

You if you were the same height as Jermey Lin pic.twitter.com/i4ivWkUrqC

— Chuck and the Creepy Baby from New Orleans (@guythanosddd) December 6, 2021

Kanter’s tweet about Jeremy Lin is just the latest example of the Turkish-born center attempting to speak for a community that’s not his own, as he recently said that Michael Jordan — yes, Michael Jordan — has “not done anything for the Black community.” Similar to the response to his Jeremy Lin tweet, his comments were not well received by the Black community, who were curious as to why Kanter thinks he has the right to speak for them.

While Kanter may believe his heart is in the right place, his recent actions suggest that he’s doing nothing but massaging his own ego, as he frankly has no right to be A) speaking for communities that are not his own and B) calling out fellow NBA players.

RELATED: Twitter Shreds Enes Kanter For Saying Michael Jordan Has ‘Not Done Anything For The Black Community’