Enes Kanter Says He Wants To Wrestle For WWE When He Retires From The NBA, And He’s Dead Serious 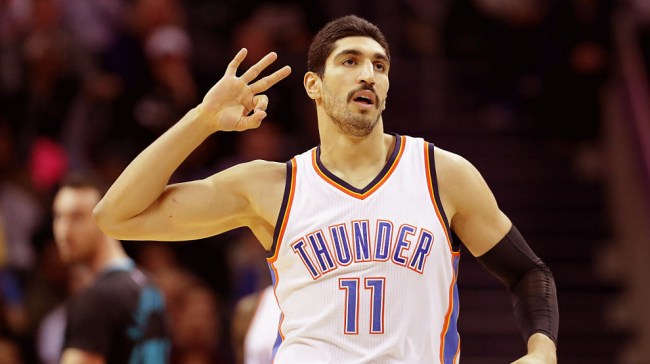 Enes Kanter, New York Knicks center and noted troll, on Twitter and otherwise (especially when it comes to LeBron James), says that when he retires from the NBA he wants to take his talents to WWE. And he’s already put the ball in motion, so to speak.

Kanter, who had a career year last season, averaging 14.1 points and 11.0 rebounds with the Knicks, is off to a very fast start this season as well with a 20.7 / 12.0 slashline through three games, has already spoken to Vince McMahon and Paul Heyman about his next career move.

In a lengthy new interview with Vice Sports, Kanter revealed just how big a fan he is of professional wrestling.

Kanter’s most intense obsession is the WWE, and it’s grown ever since he introduced himself as The Undertaker at the University of Kentucky’s Big Blue Madness in 2010. “It was funny as hell, and the fans flipped out,” Kentucky head coach John Calipari says. “There were people falling from the upper deck to the lower deck when he came out.” (When he met the real Undertaker a few months ago, Kanter’s knees shook.) Today, he’s close friends with several professional wrestlers and is dedicated to becoming one after he retires from basketball, which he hopes won’t be until his mid-30’s.

“I’m actually talking to the people over there now. Vince McMahon, he knows me,” Kanter says. “I had dinner with [Paul Heyman] two, three days ago. I asked him how long he’s gonna do this and he said ‘as long as Brock [Lesnar] goes, I go, and then I’m with you.’ I’m like yes! Seriously. I’m really serious about it.”

I could 100 percent see him working in a WWE ring as a heel. He could definitely be the next great “giant.”

The 26-year-old big man also spke about the numerous free basketball camps for children he has held all over the United States, his strong interest in NASA, how much he loves Home Alone and Jersey Shore (“I’m talking to Mike The Situation! He said ‘let me know when you have some tickets when the season starts, I will bring Vinnie and the wifey.’ That’s my man.”), how tight he is with a buck (he doesn’t own a house or a car), and growing up in Turkey (where a warrant has been issued for his arrest for speaking out against the government).