Enes Kanter Explains Why He’s Always Trolling LeBron And Others In The NBA, Including Adam Silver 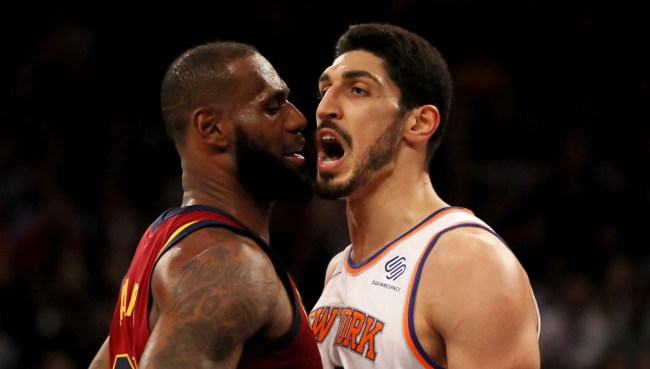 If we have learned one thing about the NBA in the past several years, it is the fact that it is far and away the most drama-filled professional sports league in America. And I am not even talking about the play on the court.

A big part of that reason is that, for some reason, NBA players seem to be the most active, and most uninhibited, when it comes to using social media.

One of the guys in the NBA who falls under that umbrella is without a doubt New York Knicks center Enes Kanter, who recently spoke to Royce Young of ESPN about his Twitter game, his beef with LeBron, and MUCH, MUCH more.

Kanter says other NBA players don’t have a problem with his crazy comments on Twitter.

“Actually they love it. They’ll come up and say ‘We love your Twitter game. Just keep trolling, keep doing what you do.’ But I think it’s just fun. You do stuff like that, the league hates it, I guess, but the fans love it. It’s the fun part of the game.”

Like the time he posted a picture of Adam Silver in a Warriors uniform, for example…

Adam Silver has agreed to a Mid Level Extension with the Golden State, league sources tell ME. 💣😂 pic.twitter.com/G9uAcVcg6w

“Yeah, the Adam Silver thing. I remember I tweeted that picture and five minutes later I sit down and think, ‘Man, I’m gonna get fined.’ I texted the Knicks PR guy and said, ‘Am I getting fined?'”

Just don’t believe everything he posts on social media, as evidenced by the time he tweeted while he was deciding to opt in or not.

“The night before I went to my friend’s house, I ate dinner and I was coming back to my house in an Uber and I was so bored. So I posted the deer emoji, and five minutes later I deleted it. On purpose.”

“So everybody was talking about it. I was like, ‘This is going viral, this is crazy.'”

Then Kanter sideswiped the entire Bucks franchise, saying about the tweet, “You gotta mess with the media a little. Because I know I was not going to go to the Milwaukee Bucks. It’s the Milwaukee Bucks. Unless they give you good, good money, then go, but you don’t leave New York for Milwaukee.”

As for his famous beef with LeBron, it all got started with a game of “bottle flip,” according to Kanter.

“With LeBron, it was weird because when I was with the Thunder I remember watching games, highlights when the Cavs were blowing out the Knicks at MSG. And then they started playing the ‘bottle flip’ game. I was like, ‘This is disrespectful, man … this is messed up.'”

“And then it was the first game I was with the Knicks and then he came and before the game he said we should’ve drafted Dennis Smith Jr. And not just me, but most of our guys felt like it was disrespectful to Frank [Ntilikina] and we actually sat down with Frank and talked to him and said, ‘Hey you gotta step up for yourself, man.'”

“Then I was in the game and they were pushing each other and I’m like, ‘This is a 19-year-old kid against a 260-pound dude. This is not fair.’ So I get in there and we were face-to-face and we trash-talked a little bit. After the game I called him ‘queen’ or ‘princess’ or whatever.”

“But I would do anything to take his focus away, distract him. People ask me, ‘Does it work?’ No it does not work. But I’m trying.”

Kanter also touches on how he feels about his ex-teammate Kevin Durant, the situation in his home country of Turkey, becoming an American citizen, and much, MUCH more over at ESPN.com.