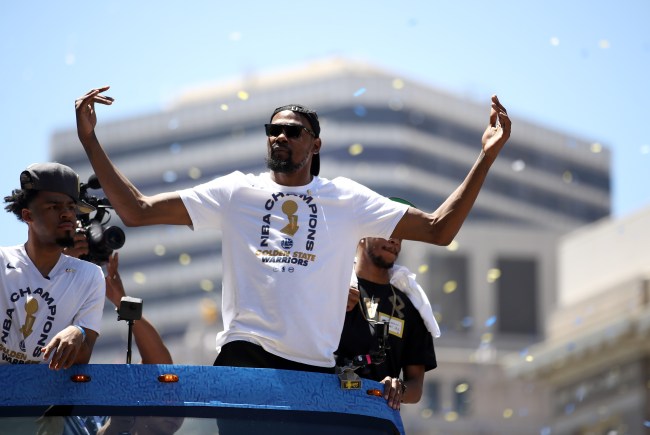 Not surprising: Kevin Durant is feuding online.
Surprising: It’s not with a 15-year-old mouth-breathing troll, but an actual NBA player.

Durant and Portland Trail Blazers guard C.J. McCollum have been sparring back-and-forth on Twitter, a beef that spilled over onto social media after the two NBA stars engaged in a tense exchange on McCollum’s “Pull Up” podcast.

Their conversation centered around Durant and DeMarcus Cousins deciding to join the Warriors, ultimately leading to Durant telling McCollum he’ll never win a championship and McCollum countering by telling Durant his move to Golden State was soft.

Here is the meat of the exchange, as transcribed by Yahoo Sports:

“I was hot,” McCollum said last week of his reaction to Golden State signing Cousins. “I don’t know if I was more mad than when you wanted to go. I think I was more mad when he did it.” This is a widely held sentiment among NBA fans, too — that the league’s richest may have just gotten a little too rich.

“Why are you made about this stuff?” asked Durant, seeking an answer that seems obvious to most everyone except a former MVP who signed with the 73-win team that eliminated him from the playoffs.

“Bro, I’m in the league,” said McCollum. “What do you mean, ‘Why am I mad about this stuff?’ I’m in the Western Conference. I’ve got to play you M.F.-ers all the time anyway as it is, over and over again. We’ve gotten eliminated by you guys a few times in the first round, so I’m looking at [Cousins].”

“You know you guys aren’t going to win a championship,” added Durant, whose trash talk had a hint of truth to it that probably stings McCollum — and probably everyone not on the Warriors — just a bit.

The trash talk made its way over to Twitter where McCollum compared Durant joining the Warriors to someone switching gang affiliations.

I still think the b word is harsh and shouldn’t be used. . He know that decision was soft but I respect it. It’s like getting jumped with ur brothers by a gang you should’ve beat then joining the gang that jumped u and ur brothers 2 months later & forgetting about your bros https://t.co/BFGqQy1lwR

So,I would get into a gang fight, lose, plot on my brother for 2 months in our home and then go get the gang we lost to and beat him up? U think that low of me CJ? I just did your fuckin podcast. Snakes in the grass boy I tell ya 🤣

So they can keep talking but I have to shutup? Sounds fishy to me but u know what, I’m not even allowed to be on here since I’m in the nba. Lemme fall back. My bad

Durant also slipped back into his old ways by punching back against Twitter eggs who called him sensitive.

He has since deleted the tweets.

The NBA offseason has been a soap opera and I love it.