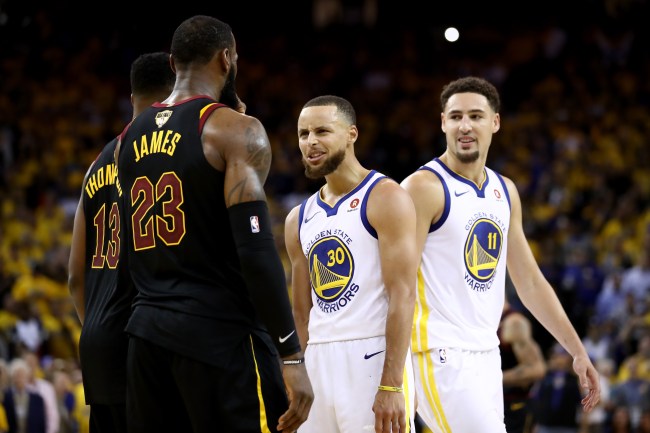 It seems like a lifetime has passed since the NBA finals ended, but let’s revisit them shall we? We shall!

With 30 seconds left in overtime of Game 1 of the NBA Finals and the Warriors with a comfortable 122-111 lead, LeBron James pinned a Steph Curry floater against the backboard, stopping to stare him down while his teammates pushed to the other end of the court. It was magical. But it didn’t end there.

Curry stood back with James, ripping out his mouthguard to presumably confront James for undressing him in front of Curry’s home crowd with the game pretty much sealed in Golden State’s favor. The exchange was heated, to say the least.

The incident pops off at the 10 minute mark of the below clip.

I remember when this skirmish went down, I turned to my buddy and said: “I’d love to know what shit talking went down right there.”

Welp, Curry recently appeared on The Bill Simmons Podcast and rewarded my patience by revealing what was said in the war of words with someone who he considered a mentor when he entered the league. At least the PG version.

“It was never going to spill over to that. But it was an interesting moment …I was hot because I was trying to finish out a possession, I think it was less than a minute left, I didn’t see him coming over from the weak side so I tried to do a little soft scoop layup and he pinned it. Then he stared me down and he said something to me.”

“And I was like, ‘That’s what we’re really on right now? We’re about to win and you’re worried about mean-blocking my shot and talking trash?’

“And then the whole Tristan and Draymond thing happened and I went back up to him and I was like, ‘Yo, what’s up? Is this really what we’re about right now?”

“And he was like, ‘I gotta do that to make sure my teammates know I’m a mentor’ and it’s a part of his leadership and that type of deal. And I was like, ‘I don’t want to be the sacrificial lamb for your leadership.’ (laughter). Come on man, that’s messed up.”

I’ll take Curry at his word, but his recollection of how the altercation went down is a divergence from how it was previously reported.

As Bleacher Report points out, “ESPN’s Brian Windhorst previously said on The Lowe Post Show that Curry had approached James in a joking manner but was told to ‘get the fuck out of [James’] face.'”

[In the clip above, it certainly sounds like LBJ said ‘Get the fuck out of my face.’]

James will be seeing a lot more of Curry and the Warriors now that he has joined the Lakers in the Western Conference. The Lakers will face off against the Warriors four times this upcoming regular season, with their first matchup coming on Christmas Day.