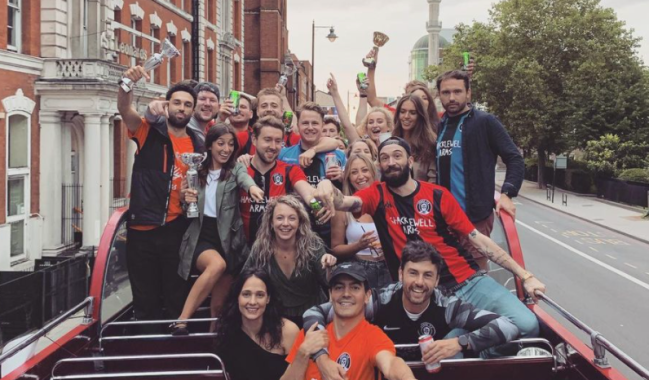 Championship parades have long been commonplace amongst the top professional sports leagues around the world. In England, however, a men’s league soccer team brought the celebration to the amateur level and the scenes were glorious.

Judas FC, a 7-a-side team from East London, dominated its 2021 spring/summer season. The team, comprised of doctors, a teacher and a salesman, won not one but two trophies.

But instead of heading to their local pub, Judas FC decided to go big and celebrate with a championship parade. Each player chipped in £660 (about $900) to rent a true, London-style double decker bus and deck it out with banners.

The parade route took the team and some of its closest friends and family through some of the city’s tourist hot spots, including Tower Bridge and the Shard. It was absolute scenes.

When the celebration was over, they finished at the pub. Their sponsor, The Shacklewell Arms, greeted the team with free drinks.

“It’s not just about the title but having all the lads together every week, on the pitch, in the pub, on the roller disco dance floor,” said team captain Christian Collins to My London. “It’s hard graft but worth every second.”

Judas FC will look to repeat as champions this fall but has fallen to the bottom of the table early. The celebration is over, it’s time to refocus!