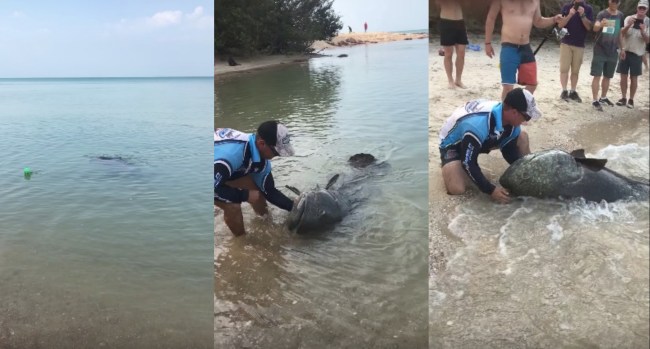 These Australian bros were fishing from the beach when they reeled in one of the largest Queensland Grouper fish I’ve ever seen. I’ve never been fishing in Australia, so I can’t really speak to what they were out there to catch. But, here in America when we’re fishing form the beach with tackle that heavy it’s typically shark fishing.

I don’t know if these Aussie bros were shark fishing but I’d wager that they were, so it must’ve come as one hell of a surprise when they reeled in that Queensland Grouper weighing at well over a hundred pounds and with a mouth big enough to swallow a bull mastiff.

Here’s the description below the video:

“We were lucky enough to be able to go fishing on Sunday after we finished work. My mate was fishing when this big girl took his live mullet. It was an hour fight on 50 lb and 60lb leader. We did not think he would land the fish. Finally, we got her to the beach and I had to grab her before she broke the line. We pulled her up, cut the wire as close to the hook as possible, got a quick photo and she swam off to fight another day.”

Queensland Grouper is what we here in the states call Goliath Grouper (formerly Jewfish Grouper). I’m 99.99% certain of this, but not positive since I’m not Australian, but while searching for the Queensland Grouper IGFA World Record I was redirected to Goliath Grouper. I guess it’s worth noting that goliath grouper are protected in the U.S. but not everywhere in the world.

For what it’s worth, the all-tackle world record for Goliath Grouper is 680-pounds and that was a fish caught in Fernandina Beach (Amelia Island), Florida back in 1961. The IGFA all-tackle world record for ‘Giant Grouper’, whatever that is, was a 395-pound fish caught in Latham Island, Tanzania in March of 2004. Suffice it to say, Grouper as a species tend to get REALLY big when they grow up on fertile reefs.

Here on BroBible, I’ve covered some crazy large grouper fish being caught in the past. It wasn’t too long ago that a new spearfishing world record for grouper was set when this 350-pound fish was shot. This bro managed to reel in a gargantuan grouper from a jet ski. This 400-pound grouper caught in China was a legitimate dinosaur. And this insanely large Warsaw Grouper was caught in my hometown….Gotta love Grouper fishing, don’t you?