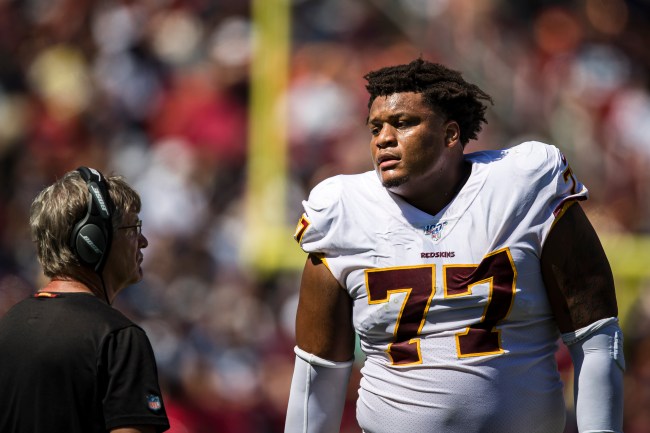 Ereck Flowers hasn’t exactly had the career many may have thought he would when he was drafted No. 9 overall in the 2015 NFL Draft by the New York Giants. Whether it’s inconsistency, bad luck or something else, the former Miami Hurricanes offensive lineman just hasn’t lived up to expectations, and finds himself on his third team in his short career — currently playing for the Washington Redskins.

While Flowers hasn’t exactly done much on the field, he did plenty of talking following his Skins’ pathetic 24-3 loss to the Giants the other day, being more than happy to be as candid as possible about the entire franchise that once drafted him.

Following the blowout, Ereck Flowers had some choice words about the G-Men, ripping the front office, head coach and fans a new one. Here’s what he had to say to NJ.com.

“Gettleman?” Flowers said. “Nah, I don’t care to see him. [Expletive], the world will go into flames before me and him have a conversation.”

“I don’t care for him either,” Flowers said.

Giants fans even failed to impress Flowers with their jeers Sunday.

“None of them were creative,” he said. “Just talking. They can say what they want. If you watched that game, there’s nothing you can really say to me. I thought it was a winnable game. I think that we played a lot harder teams before. I felt like I held my own, but it doesn’t matter, because we didn’t win.”

“[Expletive], nobody is more happy not to be here than me,” Flowers told a group of reporters. “This has been so much more of an enjoyable experience, man. I’m not looking back at my time there. Being here [with the Giants] for me was just toxic. It was toxic on the field, off the field. It doesn’t fit me.”

Those are some choice words from a guy whose team just got obliterated, don’t you think? Plus, as dysfunctional as the Giants may have been (and may still be), Ereck Flowers’ Redskins are just about as sorry of a franchise as there is in all of sports, not just the NFL; so it’s odd that he’s running his mouth following a three touchdown beatdown.

Flowers’ latest criticism of his former team comes a few weeks after he initially bashed the Giants, saying he felt like he was the villain while on the team, per NJ.com.

“If you read about me, you’d swear I was this villain,” Flowers told NJ Advance Media, as he prepares to debut as Washington’s left guard Sunday against the Eagles. “A lot of people don’t know me, so maybe some people have some built-up opinion about me.”

Considering Ereck Flowers is one of the biggest draft busts the Giants have ever had — and, you know, shoved a reporter in the locker room once following a game — there probably aren’t too many fans who are too upset with any of this. But it might be time for the behemoth offensive lineman to drop any hard feelings towards his old team and just focus on how the hell he can help the Redskins actually get a win this season, because they look miserable.