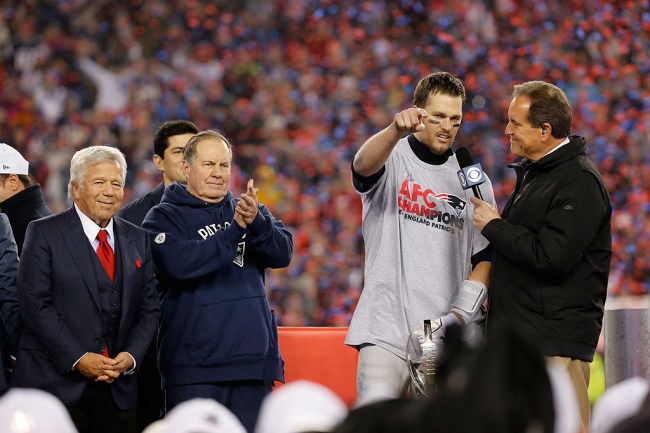 Uh-Oh, there might be trouble in New England. According to Bruce Allen from Boston Sports Watch, ESPN is getting to publish an explosive story claiming there’s a huge rift between Tom Brady, Bill Belichick and Robert Kraft about who is responsible for the team’s success.

This afternoon it was reported that Bill Belichick wanted to start Jimmy Garoppolo over Tom Brady to start the season but owner Robert Kraft quickly shut that down. Now we’re learning that Tom Brady may have gone behind Belichick’s back to force the team to trade Garoppolo.

Source: ESPN readying new hit piece on Bill Belichick, Tom Brady and Robert Kraft set to publish tomorrow morning at 8am. The topic will be a power struggle among the trio as to who deserves the most credit for the dynasty.

The article claims that the rift is so severe many Patriots feel this is the last year together for the trio. Also that Brady went to Kraft to force Belichick to trade Jimmy G. ESPN is planning a full day of promotion tomorrow for the article and its author @SethWickersham

ESPN’s Sarah Spain confirmed that Seth Wickersham was readying a story on the Patriots but would not confirm if Allen’s information was correct.

yeah i wasn't clear, apparently. i didn't mean the story about the pats, i meant the seth story coming out tomorrow that we were promoting.

Will be in pod – first hour. Seth will be on w&g and SC all day tomorrow talking about it if you're interested.

yeah i wasn't clear, apparently. i didn't mean the story about the pats, i meant the seth story coming out tomorrow that we were promoting.

This is a pretty fucking huge deal considering the Patriots are probably the greatest sports dynasty. It would be crazy to even fathom Bill Belichick leaving the Patriots and coaching another team but it looks like there’s a possibility that it could happen.