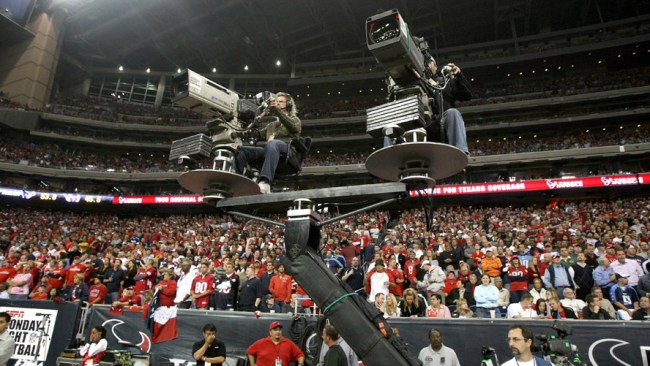 Not only will two-time Super Bowl champion Booger McFarland be a new addition as a field analyst for ESPN’s Monday Night Football for the 2018 season, he will be doing it in a way that’s never been done before.

Beginning this Thursday at Fedex Field, McFarland will be giving his analysis of the Washington Redskins – New York Jets preseason game from a crane that will be positioned over the line of scrimmage for each snap of the ESPN broadcast.

He’ll be transported up and down the sideline by a cart equipped with an outreached arm that supports a two-seat platform, one seat for McFarland and the other for a camera operator.

The network, which debuts the technology Thursday night, is working out the kinks before its “Monday Night Football” broadcasts in the regular season. It will unveil the dual cart at Jets-Redskins, and next week will test a cart that transports only McFarland.

“I’ll be able to see and hear up close the footwork, motion, things that are being said, the audibles, things you can’t see from the booth,” said McFarland, a former NFL defensive tackle who played on Super Bowl-winning teams with the Tampa Bay Buccaneers and Indianapolis Colts.

From today's @latimessports: ESPN takes #MNF field analyst @ESPNBooger to another level (via @LATimesfarmer). Watch him tonight on #NYJvsWAS -8p ET. He will have the best seat in the house each week. https://t.co/WuvOq3kWvu pic.twitter.com/GNYK9wBL3r

On top of that, McFarland will also have a desk with a computer and video monitors and have a “Facetime-type connection” with new play-by-play man Joe Tessitore and new analyst Jason Witten.

Things will get very interesting for McFarland when the “BoogMobile,” as they’re calling it, starts moving around on the sidelines, especially in rain or snow.

“I do have a fear of heights,” said McFarland. “That’s why it’s going to be a good thing that I’m watching and analyzing football. Because if I was just sitting there and had the opportunity to look down, I’d probably be freaking out. My family can tell you I’m not really a guy that likes roller coasters. I don’t like going on Ferris wheels. I’ve got a six-feet rule; I like my feet no more than five, six feet from the ground at all times.”

As if we needed one, now it looks like we have another reason to tune in to the Jets-Redskins game on Thursday night.