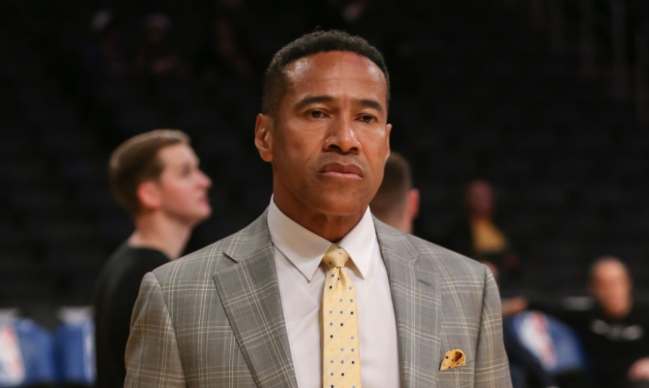 Following a video highlighting protests that have taken place around the NBA during Wednesday night’s Lakers-Bucks game, ESPN broadcaster Mark Jones mentioned protests in response to the Jacob Blake shooting last August. There’s absolutely nothing wrong with that, but Jones went on to say that “Blake was, of course, unarmed” which is false.

The claim that Blake was unarmed has been argued and disputed since the tragic incident last August, but back in January Blake himself told the world that he grabbed a knife after getting into an altercation with officers and being tased. Investigators found a knife on the driver’s side of Blake’s vehicle. After many initial reports stated he was unarmed, The Washington Post and other publications corrected previous stories and tweets explaining that he was armed.

Despite all of this, Jones still made it a point to falsely state that Blake was unarmed during a nationally televised NBA game.

Jones either consciously lied while on-air, or missed the hundreds of stories published and shared about the facts surrounding the Blake case.

Blake being shot seven times in the back and being partially paralyzed was horrible. Everyone with eyes, a brain, and a heart agrees on this, but facts are facts, and Jones spewing falsehoods on national television is extremely troubling.

Jones is no stranger to stirring the social justice and political pot, yet ESPN has not commented or acted upon his troubling comments and actions.

After the Breonna Taylor verdict, and just hours before calling the Army-Cincinnati football game, Jones tweeted that he’d be refusing the police officer on duty to protect him and colleagues at the game because he’d “rather not have the officer shoot me because he feared for his life because of my black skin or other dumb ish.”

Jones went on to call the game.

Saturday at my football game I’ll tell the police officer on duty to “protect” me he can just take the day off. Fr.

I’d rather not have the officer shoot me because he feared for his life because of my black skin or other dumb ish.

I’m not signing my own death certificate💯

In year’s past, however, Jone has tweeted his praises for police:

S/o to the Syracuse Police Dept who helped me secure the 💼 today. I appreciate y’all. Keep up the great work. Real professionals👏🏾👏🏾🙏🏾 pic.twitter.com/RytChETJ6E

I'm not going to lie. I love our police escorts to the stadium. Saves us a good 40 min to 1 hour of not waiting in traffic.

During the NFL season, Jones reportedly liked tweets that mocked Nick Bosa tearing his ACL as well. The tweet he liked mentioned that Bosa was a Donald Trump supporter.

ESPN letting this type of stuff slide while doing nothing but promoting Jones sends a very clear message, which is the four-letter network’s beliefs align with Jones’. That’s not a surprise to anyone that’s been paying attention to ESPN over the years, but it’s still unfortunate that falsehoods and ridiculous actions have no repercussions for those that fit a narrative that not everyone in the United States is on board with.