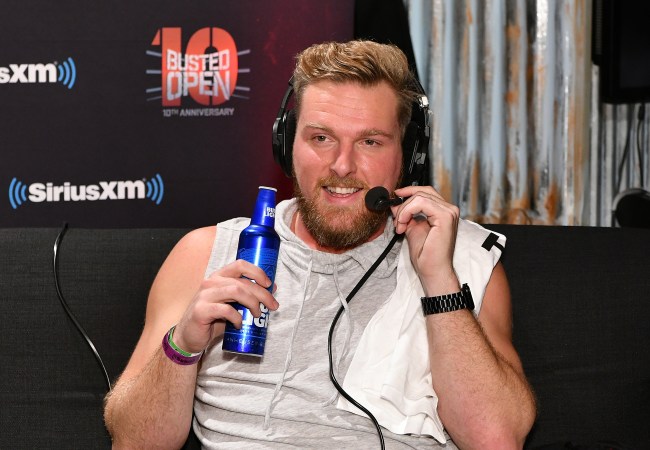 Earlier this year the Worldwide Leader In Sports tried to hire Drew Brees, Tony Romo, Philip Rivers, Al Michaels and Peyton Manning to replace Booger McFarland and but struck out with all of those options.

ESPN had interest in Brees for “Monday Night Football” and was willing to wait for him if it could have agreed to terms. It had previously wanted to hire Tony Romo, but CBS locked him up for $180 million before Romo could officially hit the open market. ESPN again went after Peyton Manning, who declined. Philip Rivers decided to continue playing.

NBC declined ESPN’s exploration in trying to trade for Michaels. ESPN had hoped for a powerhouse combination of Michaels and Manning.

Now with the pandemic hitting them hard financially, ESPN is looking for cheaper alternatives including Louis Riddick, Dan Orlosky and fan-favorite Pat McAfee.

The network has made no official announcements about changes to the announcing team of McFarland, Joe Tessitore, and sideline reporter Lisa Salters. ESPN declined to comment about possible turnover in the broadcast booth.

At the top of the list are football analysts Louis Riddick and Dan Orlovsky, “SportsCenter” anchor-turned announcer Steve Levy, and former punter and fast-rising media personality Pat McAfee. Like nearly every company, ESPN and parent Disney have been hurt financially by the pandemic.

The Walt Disney Company has ordered execs from the vice-president level on up to absorb pay cuts of 20% to 30%, while ESPN has asked its top 100 highest paid on-air talents to accept 15% pay cuts for three months. Throwing money at an outsider might not go over well internally at Bristol.

“When you’re asking your top 100 people to take a haircut, how can you go out and pay Kurt Warner $5 million?” asked one source. “That would be a very tough sell.”

McAfee has been interested in the Monday Night Football gig and posted this reaction when ESPN offered Brees an absurd amount of money.

Pat would be a fun hire for ESPN if they end up going that route.