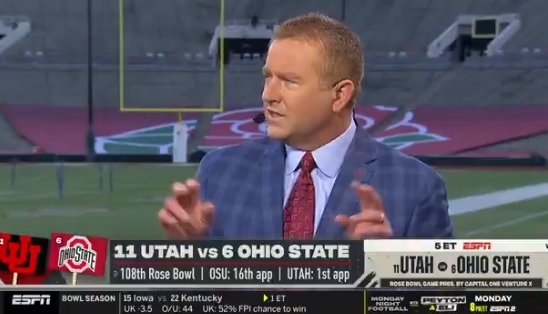 ESPN’s Kirk Herbstreit And Desmond Howard started the new year by ripping into players who opt out of bowl games.

During the latest edition of College GameDay, Herbstreit questioned if current players really loved football because they didn’t want to play in “meaningless” bowl games.

and, as befits a show that shouldn't even need to be on, the hosts are wilding out with "today's youth are entitled and it's the fault of video games" nonsense pic.twitter.com/4EdBFuTivH

“What’s the difference as a player and saying these games are ‘meaningless? Des, we played in ‘meaning games.’ I just don’t understand that if you don’t make it to the Playoff, how is it meaningless to play football and compete?”

“Isn’t that what we do as football players, we compete? I don’t know if changing it, expanding it is going to change anything, I really don’t,” “I think this era of player just doesn’t love football.”

Howard echoed Herbstreit’s sentiments and blasted opt-out players for having a “sense of entitlement.”

“When we were coming up, Herbstreit and myself, to go to a bowl game was a huge reward for a fantastic season. That’s what it meant. It’s like, ‘Ok your team played this well so you’re going to be rewarded by going to this bowl game, you’re going to get a ring, you’re going to get swag.’ Now, kids don’t really care about that. They have a sense of entitlement and it’s like, if we’re not going to the one that matters, then it just doesn’t have as much value to them as it did us growing up.”

Fans immediately fired back at Herbstreit and Howard over their comments on opt-outs.

Back in the day, Herbstreit played for John Cooper, who had a base salary of $98K/yr as Ohio State’s head coach.

Let the “entitled” players do what they want. https://t.co/6GGeuiclXd

“I think this era of player just doesn’t love football” by Kirk Herbstreit this morning is a typical old guard insult.
A new generation gains knowledge and power, and as a result the old guard questions its heart.

Now rip Brian Kelly for loving money more than football and bouncing from Notre Dame before a bowl game. Also, history is thick with players who suffered bowl injuries and impacted their livelihood moving forward. Stop banging on kids for making decisions to protect their future. https://t.co/MMEXGP7XiU

Generalizing generations pisses me off.

To quote a movie from when Herby was a kid: “The kids haven’t changed. You have.” https://t.co/1uNNb9WgUm

Where do Herbstreit and Desmond think "these kids" got the idea of "Championship or nothing"?

Certainly not from a weekly hour-long TV show where all anybody talks about is the 4-team #CFBPlayoff, right?!! pic.twitter.com/D0pLcyQ2CM

Kirk Herbstreit said this era of football doesn’t love football. That’s such a clown take. Um no Kirk. This era of football players love the game just the same. They just look out for themselves better than past generations and know their value better. Nothing wrong with that. pic.twitter.com/wMMMlHw1Dh