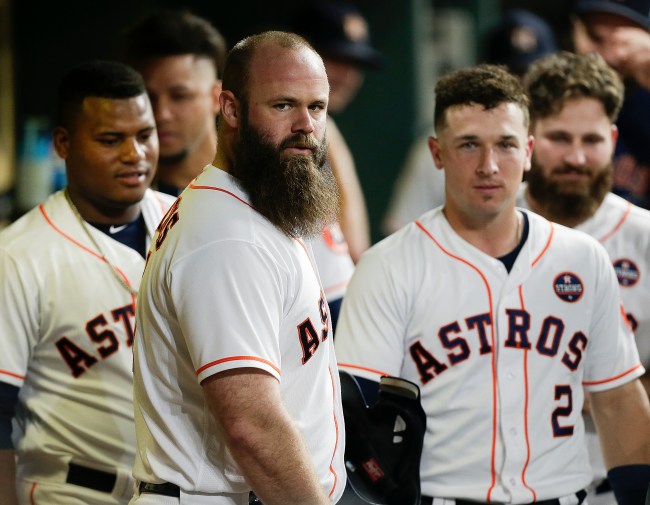 Who would have thought that in April 2020, typically on the cusp of the Final Four and three of the four major sports in play, we’d still be biting the meat off the bone of the 2017 Houston Astros.

But here we are, and Evan Gattis just salt-and-peppered the bone for our satisfaction.

The former Astros player, who just yesterday said he was ‘done‘ playing ball, spoke to The Athletic on the 755 Is Real podcast and expressed a sincere apology for his role in the now infamous cheating scandal.

“I don’t know how to feel yet. We didn’t look at our moral compass and say, ‘Yeah, this is right.’ It was almost like paranoia warfare or something. What we did was wrong. Don’t get it twisted. It was wrong for the nature of competition — not even just baseball. Yeah, that was wrong. I will say that. … We cheated baseball. We cheated fans. Fans felt duped. I feel bad for fans because I really wish everyone was there. I wish everyone could experience what it’s like to break spring training and break for the big-league club and be in a big-league clubhouse, part of a big-league team. I wish everyone knew what that was like.

“But I’m not asking for sympathy or anything like that. Part of the punishment is being hated by everybody forever. I don’t know what should have been done but something should have (expletive) been done. I do agree with that big time. And I do think it’s good for baseball that they clean it up. I’ve thought about it a (expletive) (expletive)-ton, and I still don’t know how I feel … I understand that it’s not (expletive) good enough to say sorry. I get it.” [transcribed by For The Win]

Gattis’ apology comes just days after the former DH tweeted out a photo of a glass featuring Athletics pitcher Mike Fiers and the phrase “snitches get stitches.”

Fiers, an Astro from 2015-2017, told The Athletic in November that Houston electronically stole signs in 2017, an admission that earned him both praise and death threats.

The way the “public” feels about us cheating is how I felt when I at least assumed that other people were cheating against us. No excuses. But I understand everyone’s anger. Doesn’t exactly put humpty dumpty back together again.