Evander Holyfield Says He’s In Talks For Trilogy Fight Against Mike Tyson: ‘I’m Ready For Him’ 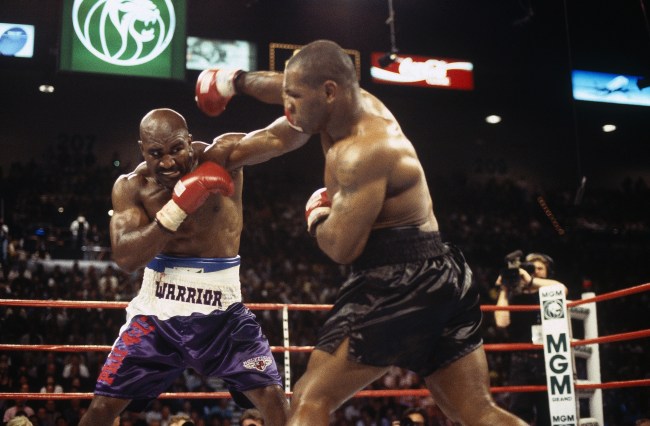 Following the massive success of the Mike Tyson-Roy Jones Jr. exhibition match in November, Evander Holyfield has been demanding a rematch against Iron Mike. Holyfield even said that Tyson was ducking him. Now, Evander says that he is in talks with Tyson for a much-anticipated rematch.

Former heavyweight champions Tyson and Holyfield, who have a combined age of 112, may meet in the boxing ring for the third time.

“People do what they choose to do and for whatever reason they have, they do it,” Holyfield told The Sun this week. “The thing is that if it’s meant to be it will happen, either way, it is what it is.”

“What I can tell you is that my team is talking to Mike’s management, so I’m waiting for a decision,” the “Real Deal” said this week. “They are communicating right now.”

“The thing is I’m still training for this, I know it will be someday this deal will happen and I’m ready for him,” he stated. “I’m doing OK.”

It has been 24 years since Tyson and Evander last fought, at the “Bite Fight,” where Tyson gnawed off chunks of Holyfield’s ear and spit the human flesh onto the canvas. Tyson was disqualified. The boxing legends first fought in 1996, when Holyfield pulled off the incredible 11th round TKO upset. The two have been friendly since retiring from the sport.

On this date in 1996, Evander Holyfield beat Mike Tyson thanks to an 11th-round technical knockout in their heavyweight title fight.

Their second fight had a different finish… pic.twitter.com/S5lDuSLlqs

Holyfield believes the trilogy fight would bring in a MAJOR payday for both retired boxers.

“Where an opportunity is available, I like to make the best out of what I have,” Holyfield said. “I believe if I fought Mike the fight will generate $200 million.”

“It will be the biggest fight there is. That’s the honest truth. I think Mike has my message already,” Holyfield continued. “If he is going to do it he is, if not then he’s not. It’s a decision he has to make now and we both have to be in an agreement.”

The November 28 fight at the Staples Center between Tyson and Roy Jones Jr. that ended in a draw reportedly reeled in more than $80 million after there were over 1.6 million pay-per-view purchases.

“Roy Jones was a good local opponent for Mike,” Holyfield previously said. “But a fight with me would be a global event and the only fight that anyone wants to see is a fight between us. There is absolutely no reason why we shouldn’t make it happen.”

“I’m not going to tell anybody what I’m going to do – my strategy I’m planning on using against Mike – I don’t want anyone to know.

Mike Tyson vs Evander Holyfield III could be happening! 🔥 😲 pic.twitter.com/GId7tr8jcv