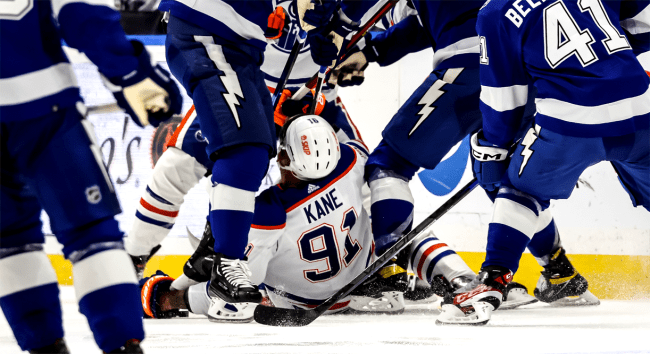 Evander Kane’s ex-wife, who as we have seen numerous times in the past, obviously hates him, took a shot at the star and promoted her OnlyFans in the wake of his gruesome, bloody injury Tuesday night.

During the game against the Edmonton Oilers, Kane suffered a nasty cut on his wrist from the skate of Tampa Bay Lightning forward Patrick Maroon.

The accidental cut came after Evander Kane and Phil Meyers collided near the boards. In the scrum for the puck, several other players skated around Kane as he was lying on the ice. One of Kane’s teammates, Dylan Holloway, ended up pushing Maroon into Kane, resulting in him skating over Kane’s wrist.

Kane was rushed to the hospital after racing off the ice with a terrified look on his face.

Shortly after his scary injury, Evander’s ex-wife Anna Kane posted a Instagram story with the caption “Only smiles over here” and promoting her OnlyFans account.

Anna Kane posts ‘only smiles over here’ and promotes her only fans after her ex husband, Evander, got his wrist slit by a skate and was transported to a hospital. Disgusting. pic.twitter.com/2ss2Z5Imjp

Many hockey fans were quick to jump on Anna Kane for seemingly making light of what could have been a very serious situation with her ex-husband.

Sick in the head

Wednesday morning, Evander Kane was able to share a message on Twitter that he was doing okay.

“Thank you all for the kind wishes and prayers from over the past several hours,” Kane wrote. “Obviously last night was an extremely scary moment for me and I’m still in a little bit of shock.

“I would like to thank the entire training staff of the Edmonton Oilers and Tampa Bay Lightning, along with all the doctors and paramedics who rushed to help treat and repair my injury. Without all of you I know things would’ve been much worse and I’m sincerely grateful. I won’t be back next game, but I will be back and I look forward to being back on the ice playing the game I love alongside my teammates in front of our great fans.”

To fully understand the bad blood between these two, here’s a small portion of the timeline showing some of the shenanigans Evander and Anna Kane have gone through over the past two years.

January 2021: Evander Kane Files For Bankruptcy After Managing To Rack Up Almost $27 Million In Debt

July 2021: Anna Accuses Evander Of Gambling On His Own Games

August 2021: Anna Calls Out Model For Hooking Up With Evander

August 2021: Anna Claims Evander Gambled With Criminals Who Threatened To Kill His Family

The NHL has suspended San Jose Sharks forward Evander Kane 21 games for submitting a fake COVID-19 vaccination card. The Vancouver-born player will forfeit about $1.68M of his $7M salary for this season, with the money going to the Players' Emergency Assistance Fund.

April 2022: Anna Venmos NHL Player Who Was Fined For Flipping Evander Off On The Ice

Wow Evander Kane's ex-wife came here to chew bubble gum and stir the pot and she's all out of bubble gum pic.twitter.com/3qUfbLUBsL