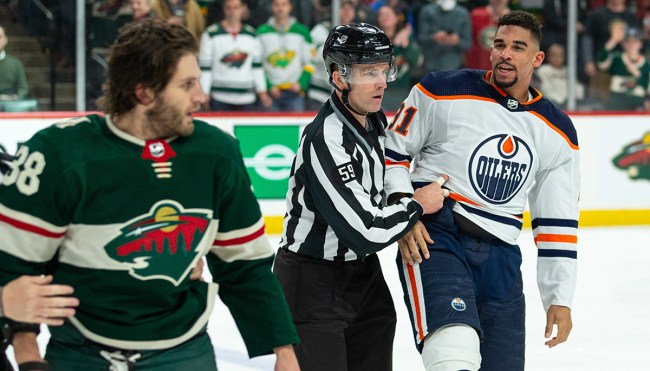 By most accounts, Evander Kane hasn’t made a ton of friends during his time in the NHL; it’s safe to say most members of the San Jose Sharks weren’t too sad to see him placed on waivers last year based on the slew of drama he reportedly created in the locker room during his time with the team.

In recent years, Kane’s performance on the ice has been largely overshadowed by the controversies and scandals he’s managed to generate off of it. In 2019, he was sued by a Las Vegas casino for over $500,000 in unpaid gambling debts (a habit that likely played a role in him filing for bankruptcy after falling $27 million in the red), and his ex-wife Anna publically called him out for cheating on her in the midst of a very messy separation last year.

Kane is also one of the NHL’s biggest pests, and during Tuesday night’s game between the Wild and the Oilers, he managed to draw the ire of basically every Minnesota player before finding himself in the middle of a heated scrum.

Ryan Hartman attempted to dole out some old-fashioned punishment, but after the refs prevented him from doing so, he was forced to settle for the middle finger he threw in the direction of Kane after they were separated.

On Wednesday, Hartman was fined $4,250 for the “unsportsmanlike” gesture, and it didn’t take long for plenty of supporters to flood his Venmo with donations to help him pay it off.

Ryan Hartman’s Venmo is just people giving him money towards the fine for flipping of Evander Kane 🤣 pic.twitter.com/5yZg1EuGXu

That group of donors featured none other than Kane’s ex-wife, who revealed she sent Hartman $200 for fighting the good fight.