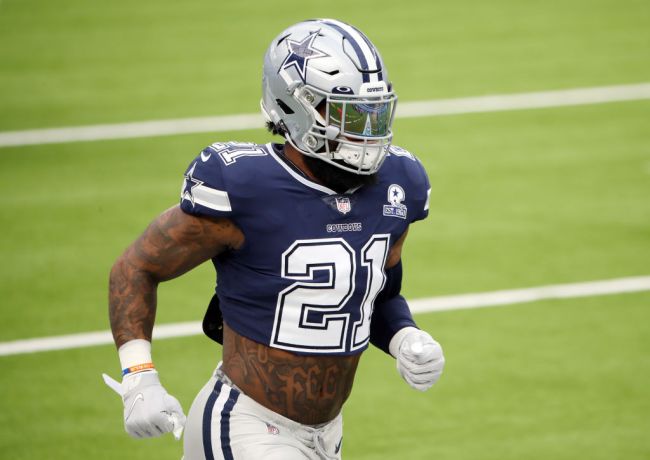 Ezekiel Elliott had a strong performance in the Cowboys’ season opener against the Rams on Sunday night. He rushed for a touchdown, caught a touchdown, and wracked up 127 total yards in Dallas’ 20-17 loss, but that’s not what we’re here to talk about, we’re here to discuss his new ink.

After catching a swing pass from Dak Prescott and scoring Dallas’ first touchdown of the season, Elliott lifted up his jersey and showed off his new tattoo that reads ‘Feed Me.’ And as you can see in the image above and in the video below, it’s not just a subtle tattoo either, this thing is gigantic.

‘Feed Me’ has been Elliott’s go-to celebration and motto after big plays going back to his days at Ohio State. At some point this offseason Elliott decided to take things to the next level and instead of just doing the ‘feed me’ motion, he had to get the words permanently written across his entire stomach.

For now, the tattoo looks fine, but what happens when he retires from the NFL and inevitably puts on some pounds? On the one hand, it’s a walking joke waiting to happen, on the other it could be a motivator for him to stay in-shape because one simply can’t get fat and have ‘feed me’ written on their gut. Elliott may actually be a genius.

For me, if I had Elliott’s bank account, the moment I retired I’d let it all go and without question put on a quick 50 pounds. We’ll see how Elliott and his new ink handle things over the years to come.