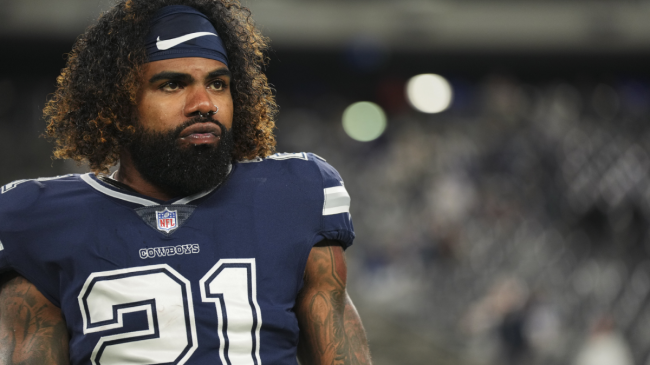 Ezekiel Elliott had a chance to witness history on Tuesday night with Aaron Judge hitting his 62nd HR. The Yankees played the Rangers in Arlington, where the Bronx Bomber was able to break the American League record for home runs in a season.

Most fans would kill for a chance to be a part of history. One guy even risked life and limb on Tuesday, leaping over the front row railing for an opportunity to nab the record-setting shot.

But instead of attending, Elliott chose to remain home.

He certainly had the opportunity to make the game. Teammate Micah Parsons had a box set up for family and friends, with the Dallas running back landing an invite.

Still, he opted to skip out. On Wednesday, he gave his reasoning, which seems a bit petty to most.

Cowboys writer Clarence Hill, Jr. had a chance to speak with Elliott on Wednesday after practice, and he got the rusher’s reasoning behind missing the game. Here’s what he had to say.

“I hate driving all the way to Arlington. No disrespect to Aaron Judge. I respect his game. We had practice today. It was Micah’s suite. He invited me. I’m just not driving to Arlington, unless I have to.”

Elliott said he doesn’t go to Arlington unless he has to. Keep in mind that the Cowboys play in Arlington eight weeks of the year.

The Cowboys had practice at their facility in Frisco, which is about an hour from Globe Life Field. That wait time might increase with traffic.

It seems he’d rather watch from the comfort of his own home rather than sit on the interstate. Elliott isn’t losing any sleep over not being in attendance. His teammates might keep that in mind next time they invite him for a night out.